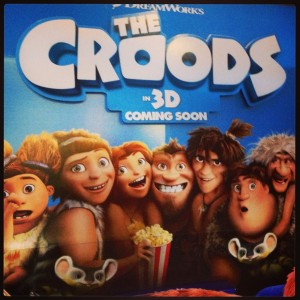 A few weeks ago Nuffnang Australia were running a competition to win tickets to the preview of the THE CROODS.  The lastest animation from DreamWorks. All you had to do was either tweet or instagram a photo or statement of ‘the wildest thing either you or your kids have done’.

The very first thing I thought of was a photo I had of Master J and his buddy Master C with a python around their necks.  I just love the expressions on their faces – such a pair of little dudes.  Plus they’re holding a python……..and for me (who is terrified of pretty much anything that moves and is not human) that’s pretty wild!!  So I fished out the photo and stuck it on twitter.

Guess what??  We WON some tickets!!!!!  WOO HOO!!  I received 4 tickets to The CROODS preview at Fox Studios in Sydney’s entertainment Quater.  The kids were SO exited when I told them, and of course we had to take Master C too, as he had been in the winning photo.

The journey there was a bit of a trauma as a.) I am TERRIBLE when it comes to driving in the city.  I become such a nervous nelly when I don’t know where I am going and b.) Emily (my trusty Sat Nav) became not so trusty and decided to take us on a tour of the city!!  I knew when I saw the Opera House and Bridge for the third time that she was probably having a laugh at my expense!  “Are we there yet mum??????” they all called from the back.  “Nearly, nearly”  came my reply – trying my absolute best to keep my voice stable when all I really wanted to do was give Emily a piece of my mind!!!  If it wasn’t illegal to litter I would have loved to have ripped her out the car and flung her into the bottom of the harbour!!

Anyway, with the help of my iphone and a MUCH more helpful Aussie voice on google maps, we finally made it – and only JUST in time.  I had to queue for almost half an hour to get into the car park (the Sydney Family Show was on that weekend too).   I started to panic a little that we’d never find a space when I had a genius idea!  I learnt out the window and called over to the car wash dude. Fluttering my eyelashes just a little, I asked “If I pay you to wash my car can we all get out here (in the middle of car park) and just leave you to find us a space??”  “PLEASE, the kids are so excited and we’re about to miss out movie” (more pleading eyes).  “Oh go on then” he said “but it’ll cost you 40 bucks!!  DONE!! We jumped out the car and ran!! 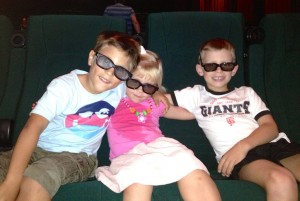 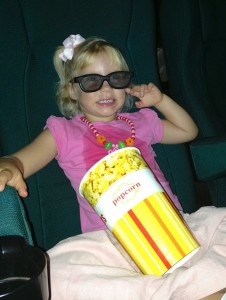 The movie was FABULOUS!!  I think I laughed even more than the kids.  I’m not sure what I enjoyed more though, watching the movie or watching Miss H.  It was the first time she has even seen a movie in 3D and her reactions were just too cute!!  “MUMMY!”  she yelled at the top of her voice “It’s real – it’s really real”.  The colours and animations were incredible and at one point a whole bunch of fireflies looked like they were flying right into the audience.  Poor Miss H ducked her head to get out of their way and spilled her orange juice all down her top!  She was so mesmerised by it that she didn’t even notice!

Of course the boys’ best bit was when the Croods bum’s caught on fire – they thought that was hilarious!!

So if you’re looking for something to do this Easter with the kids I highly recommend you go and see THE CROODS – great entertainment for the whole family.

Thanks so much Nuffnang we had the BEST morning (eventually).  And I have a very clean car too!