I know this may sound a little mad to some, but I like ironing.  I find it quite therapeutic and it’s probably one of the few times I can watch some trashy show on TV without feeling guilty.  My first memory of ironing (and yes, I realise that sounds very sad!!) is when I was about 16 years old.  My mum had gone back to South Africa for a couple of weeks to visit her parents, leaving my dad to look after my brother and I.  It was the summer holidays and I was just at the age when all I wanted to do was ‘hang out’ with my friends, but limited funds was causing a problem!  So dad suggested that I could iron all his work shirts for some extra cash. Win Win, I think!!  Maybe that’s why I still like ironing today – it was my first ticket towards freedom (or just some extra cash to blow and teenage girl ‘stuff’).

Now I did say that I liked ironing, but I don’t Love it!  There is a difference, really there is!!  The thing I hate about ironing is that it’s never a quick job.  It’s not something you can do at the same time as making dinner or changing a nappy or building a mermaid palace, and you really don’t want to set up in front of the telly while the kids are around because then you will most probably have to endure an hour of Dora the explorer!!  And then there’s the whole faff of sorting the clothes into different sections because you can’t iron cotton on a low heat as the creases won’t come out, but if you have anything delicate, then a high heat will burn it.  Oh and not to mention the number of times you have to fill the iron up with water to get through a single pile of ironing!!!  I think these are the reasons that so many of my friends think I’m mad doing any ironing at all!!

A couple of weeks ago (on a Tuesday – which is my dedicated ironing and catch up TV morning), I had everything set up and was going full steam ahead when my phone beeped with an incoming email. I picked it up and read the first line “Hi Robyn, how would you like to trial our new Philips PerfectCare Aqua steam iron………”  I had to laugh out loud.  How did they know?????  I quickly googled it and thought “Fantastic, yes please!”  A couple of days later it arrived!! 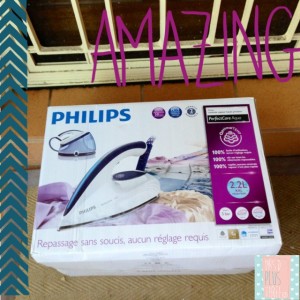 I have to admit that I was pretty excited to try it out.  I set up that evening and honestly (hand on heart) I finished the whole pile in roughly half the time than it usually takes me!!!  Even Mr D commented oh now quick I was.  He even had a sneaky go with it and was very impressed.  (Not that he irons very often, but he is partial to helping me out every now and then by ironing some of his work shirts).  I was genuinely impressed with it – and it’s definitely by far the best iron I have ever used!

So what is so great about the Philips PerfectCare Aqua?

As some of you will have read I said that I was going to try and reduce the amount of ironing that I did this year as part of my 2013 New Year’s Resolutions, and so far I’ve been pretty good. However since getting the Philips PerfectCare Aqua I might have to confess to ironing a few pillow cases and a duvet cover and even a few tea towels!!!!  It’s so easy now…….so why not??

If you have a minute watch this video, it gives a great demo of just how fabulous this iron is.

Disclaimer:  I was not paid to write this post however I was gifted the PerfectCare Aqua to trial in order to write this review.  All opinions and pictures are my own, unless otherwise stated.  I ALWAYS give my honest opinions on everything I review.

12 comments on “Philips PerfectCare Aqua Review. Ironing has never been this easy!!”