Since the very first time that gorgeous pair of character mice Mickey and Minnie appeared in the early 1940’s, Disney has become a real part of every family.  Every little girl’s dream is to become a real life Disney princess. (By the way did you know that Snow White was the first  EVER Disney princess?? Just FYI).  I can remember thinking how much I would just LOVE to be Arial the mermaid when I was a little girl – spending hours in the swimming pool with my cousin LCJ swimming with our ‘tails’ and washing our ‘long red hair’.  It makes my heart melt seeing my little Miss H doing the exact same thing without any extra encouragement from me.  Disney really is pure magic.

Yesterday Miss H and her little friend Miss B and I were invited to visit Sydney’s Entertainment Centre to to find out more about  Disney Live’s newest tour “Mickey’s Rockin’ Road Show”.  She was SO excited and didn’t stopping talking the whole way into the city on the bus.  It was so cute and I must admit – I might have been a tiny bit excited too. 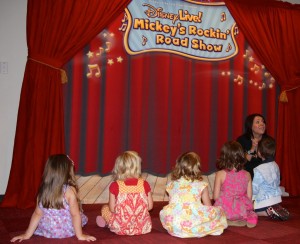 A few awesome ladies from the DisneyLive! team (who have just flown into Australia from Hong Kong after the Asian leg of their world tour)  took the time to tell the kids what “Mickey’s Rockin’ Road Show” show was all about.

The show sees Disney’s coolest characters hit the road on a search to find new talent.  The audience gets to join in the fun and help find some awesome new acts.  Your whole family will be transported on a hilarious, action packed adventure where you’ll get the chance to Sing with Cinderella, bounce with Tigger to do the hoe-down with Jesse and Woody from Toy Story, with a few exciting twists along the way.

The Disney Live! team’s enthusiasm was infectious and the kids couldn’t stop giggling.  They had to shout out their most favourite Disney character’s name for as long as they could without taking a breath.  There were lots of “Cinderellllaaaaaaaa aaa aaa aaa aaa aa *giggle* aaaa aaa aaaaaa’s” and some very high pitched “Minnieeeeeeeeeee *giggle giggle* eeeeeeeeeeeeeeeeeeee eee eee’s”  As a mummy on the sideline I couldn’t help but giggle too.

They also had some time to draw and colour-in their favourite Disney characters with some one-on-one attention from the Disney Live!  team, as well as get down and boogie to some rockin’ Disney tunes.  “Come on mum!!!!” shouts Miss H, “you have to do it too!!”  They were playing musical statues and bouncing on their ‘tails’ like Tigger.  I had Miss L on my hip and had to loose all inhibitions and get on in there for a bounce!! 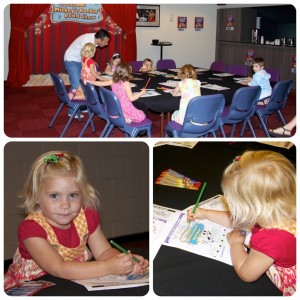 Just when the kids were doing their best Tigger bouncing, out popped TIGGER from behind a door to surprise them all!

I don’t think Miss H was expecting the real Tigger to appear, and as he bounced in she got the fright of her life!!  I think she must have jumped at least a couple of foot into the air and then burst into hysterical  tears!!  I must be such a mean mummy as her reaction (along with some of the other children) reduced me to giggles (which I had to stifle when I realised she really had gotten a genuine fright).
Poor Tigger!!  He hadn’t meant to give the kids a fright and put on his best ‘sad impression’.  After a little convincing (from me) and a few cuddles (from Tigger), the smiles and excitement, and of course the bouncing was back!!!  Miss H has not stopped telling EVERYONE about meeting Tigger!  “He gave me and my friend Miss B a big fright! she says “but then he was SOOOOO FUNNY and he bounced with us!”.

So if you want to join in the fun this summer with “Mickey’s Rockin’ Road Show” ,  The  Disney Live! Team will be touring Australia starting in Perth on 28th Dec and ending in Darwin on 24th February 2013.  Click here to find out when they will be in your area and how to book your tickets.  The show is produced by Feld Entertainment (who also produced the amazing Disney on Ice Show).  Book your tickets now so you don’t miss out.  It’s guaranteed to be fun for the WHOLE family.

Thanks so to much to Feld Entertainment, Disney Live and double edge pr for a really rockin’ morning!