My first post this year is going to be a review and it’s a pretty awesome one too.  Well, the according to the kids anyway.  It’s no secret that we’re HUGE fans of ByK kids bikes, and this mountain bike is no exception.  We took it camping with us over Christmas and Josh had an absolute blast on it.

Late last year he was gifted the 510 MTB mountain bike (lucky duck) by the lovely guys at ByK kids bikes, to put it through it’s paces.  This bike could not have been more perfect for him as he is such a daredevil and had already pushed his poor old bike passed it’s limit. 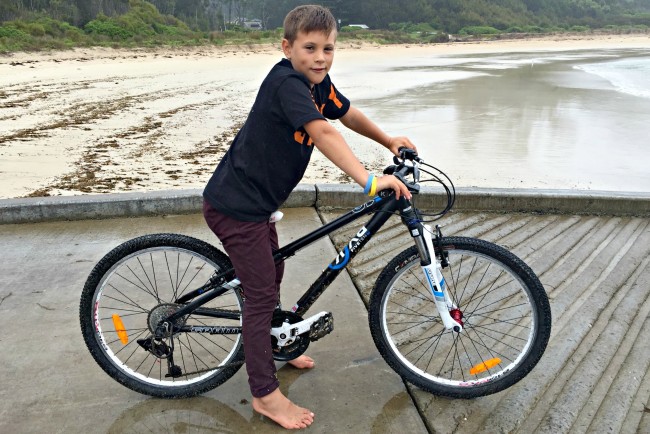 He was dead chuffed when it arrived and couldn’t wait to see what it could do.  We live in a pretty residential area, so initially he only really got to test it out by riding around our local streets.  According to Josh it was ‘sick’ – which clearly means it got a thumbs up in kids lingo.

It took him a little while to used to the different gears (all 24 of them) but Mr D took him out on a pretty tough track around Manly Damn so he could figure it all out.  They came back covered in mud and both very happy.  Mr D said the bike handled the track like a pro was so awesome he thinks they would come in adult sizes too.

So here are some facts:

Here’s a quick video I made of Josh testing out the 510 MTB.

No matter what level of biking ability your child is at, ByK bikes have got you covered.  I recently wrote a post about teaching my very nervous daughter to ride her first bike.  It was a bit of a struggle at first, but not only was her ByK bike perfect for the job, but the advice the ByK team gave me to help her was invaluable.  You can see my tips HERE.

Do your kids love to ride?

*Disclaimer:  We were gifted this bike for the purpose of review.  I was not paid to write this review, however all opinions and images are my own.

12 comments on “Some of the best fun kids have is mountain biking. Here’s a great review of the ByK Kids bikes”