Adventures with elephants came highly recommended.  Everyone we spoke to said what a fantastic experience it was.

It was a little on the expensive side, and I have to be honest, I was a quite sceptical.  I wanted to see the elephants in the wild, not doing some silly tricks for tourists.  I kept my reservations to myself though and went with the majority vote.  Adventures with elephants was happening.

Within minutes of arriving I was proved wrong.  There weren’t any of the ‘zoo-like’ enclosures I had expected to see, and the elephants really were happily roaming in the bush.  I even had a dodge a couple of wild ostriches to get some photos of them walking, ever so gracefully, through the bush to the make-shift paddock where we would be meeting them.

Sean, the owner, gave us a brief introduction about how ‘Adventures with elephants’ had come about, and his story was both inspiring and a little sad.  It all started with his father, Rory Hensman, who was a born and bred animal lover and conservationist.  He converted one of his commercial farms in Zimbabwe into a game farm so that his family could enjoy wildlife like he had.  In 1988 he was given two baby elephants that were orphaned as a result of the natural culling process that was happening across the country.  Miss Ellie and Jumbo soon became part of the family.  They would follow Rory and his wife everywhere and very quickly started to respond to their names and some quite complex instructions.  He dumbfounded critics with his training methods and soon started to adopt other elephants that were unwanted (usually due to bad behaviour or illness amongst other things).  Instead of letting them be culled, he trained them and used them to do a huge number of amazing farm jobs, as well as show people just how intelligent these incredible animals were.  The elephants were even used to help track and capture poachers.

Tragically, in 2002, Rory and his family were forcibly removed from their farm by Robert Mugabe.  They fled to South Africa with nothing but family, a few members of staff and 18 elephants. 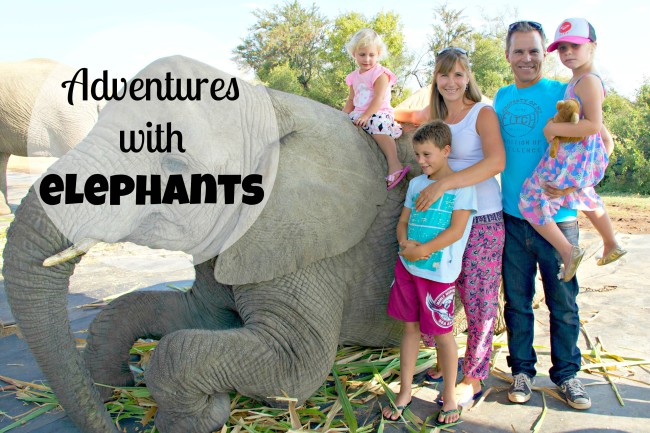 Sean is now continuing his fathers incredible work and currently they have five gorgeous elephants.  All of whom we were lucky enough to meet.

As we were introduced to each elephant, what really struck me was the incredible bond of both love and respect and trust that these elephants and their trainers have for each other. The elephants said hello by demonstrating their typical call, which sounds like a very deep grumble.  It sent shivers down my spine.  Apparently they can hear each other from up to six kilometre away.  I told the kids that was like hearing me at home when they’re at school!!

We meet Mussina first and she demonstrated her incredible sense of smell and memory. She was introduced to each of the kids by her trainer.  He would say “Mussina, meet Lexi” and she would walk over to Lexi and rub her trunk across her face and smell her hand.  Once she had been introduced to each of the kids, her trainer asked her to turn around so that she had to ‘bottom’ to us.  He then took the kids shoes, placed them in a pile on the ground and instructed Mussina to give them all their correct shoes back. One by one, she picked up the shoes with her trunk, walked up to each child and placed the shoes in their hands.  She didn’t get one wrong.  It was so incredible to watch that it actually made my eyes well up with tears. Happy ones of course. 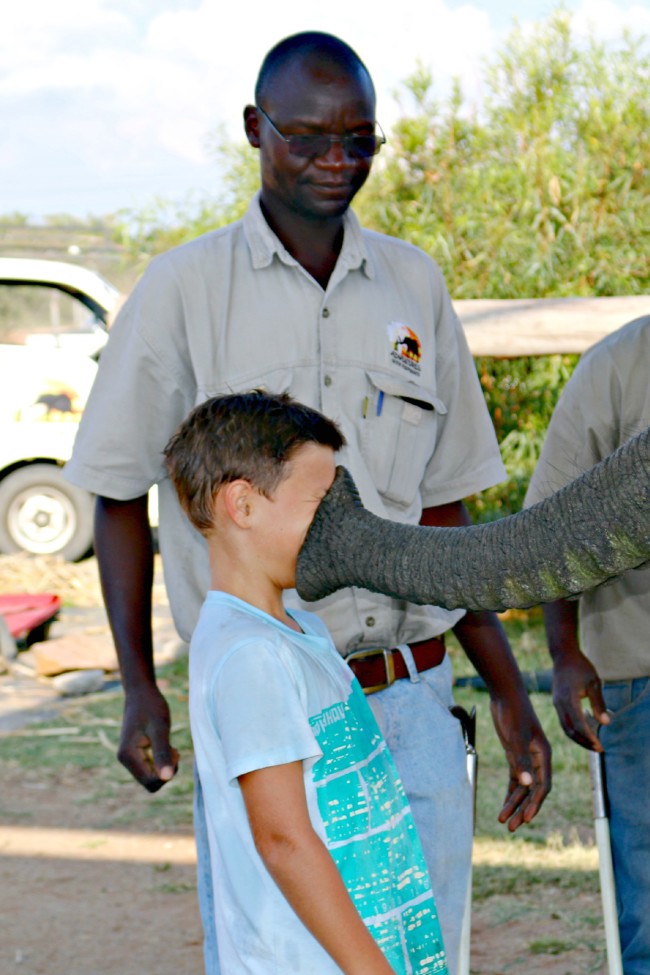 Chova was the second elephant we met and even though his name means ‘to push’ he was a real gentle soul.  He let us feed him directly into his mouth, which was pretty cool and Josh even gave his tongue a massage – as you do!!

They had such an aura about them, that even though they were HUGE animals all I wanted to do was put my arms around them and give them a great big cuddle.  In fact little Lexi-Rose did just that, without any promoting from us.

Shan, who is believed to be related to Miss Ellie (one of the original baby elephants), lay down and let us feel her skin and look at her enormous ears and eyes.  The bristles on the end of her tail were as tough as wire and Josh thought they were like the brush you clean the BBQ with.  It was fantastic to be able to get so up close and personal with them.

Nuanedi showed us her cheeky side by spraying everyone with water (twice!!).  The bottom part of her trunk was missing from when she cut it while trying to play with some loose wires. The way she was able to adapt her feeding habits was really quite clever.  Her trainer told us a story about how a neighbouring farm used to get oranges delivered every second Wednesday and she would know to stand at the fence to get some of them.  Every second Wednesday without fail.  Incredible. 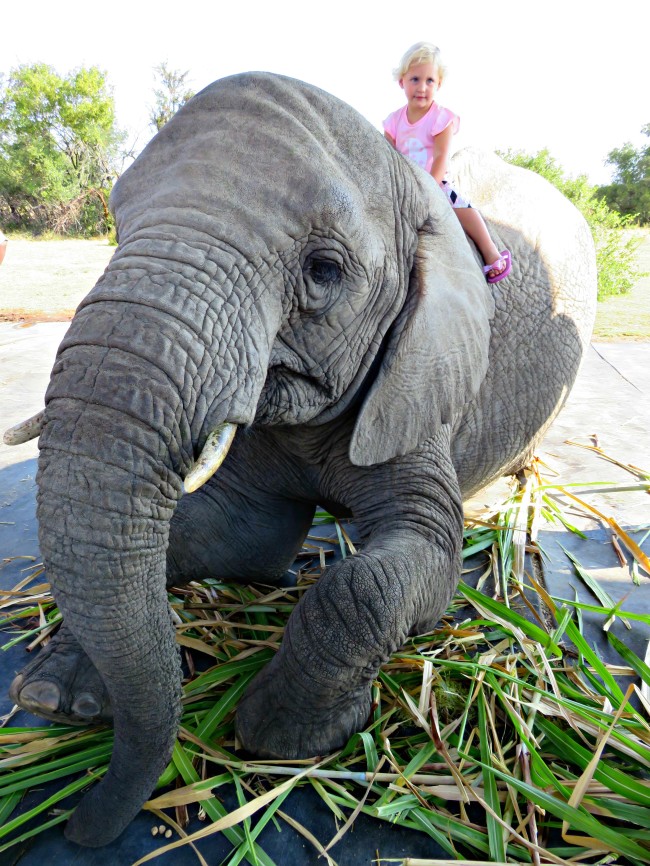 Lastly Mr D and Josh had a game of soccer with Chishuru and he very quickly showed Mr D how good his aim was!!!

The whole experience was something that I will never forget and I hope the kids will remember it too. Adventures with elephants does such an incredible job educating people about wildlife and elephants especially, that I think they have something truly special.

So was it worth the money??  ABSOLUTELY!  Every penny.

Have you ever heard an elephant grumble?

What have you done recently that you’ll always remember?

20 comments on “Adventures with elephants. Mrs D does Africa part 2”