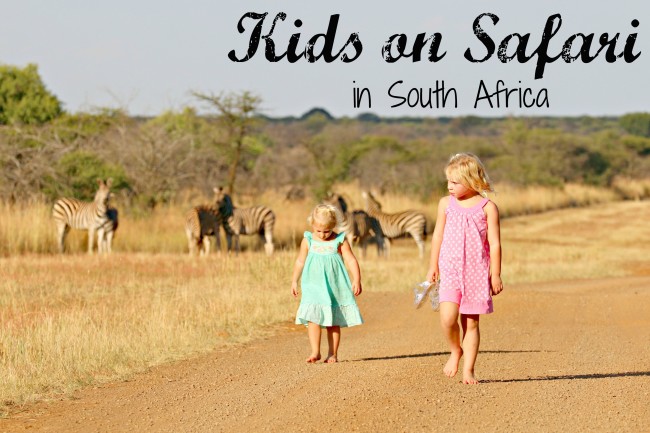 There is no way we could have gone all the way to South Africa and not taken the kids on a safari.  It just wouldn’t be Africa without a safari.

As soon as we drove through the huge gates of the game reserve, the excitement rippled through the car.  The kids had never seen an African animal in the wild before. Actually other than sheep, ducks and cows (and the odd kangaroo), they’ve never seen any animals in the wild before.  Being entirely surrounded by the African bush was an incredibly humbling feeling.  Mr D tuned the music off and slowed the car right down to about 10km per hour, and then it was game on…….who was was going to see the first animal.

After driving in total silence for about 10 minutes (a lifetime when you have 3 kids in the car), with everyone eagerly watching out of their window, a giraffe just stepped right out in front of us, and ever so gracefully crossed the road.  Just like that ……. RIGHT IN FRONT OF US!  It was so beautiful sight. The silence lasted about another 2 seconds and then of course the 5 million questions the kids had came rolling in like a tidal wave.   The excitement was epic!  There is nothing quite like spotting your first wild African animal (and giraffe’s have always been my favourite). 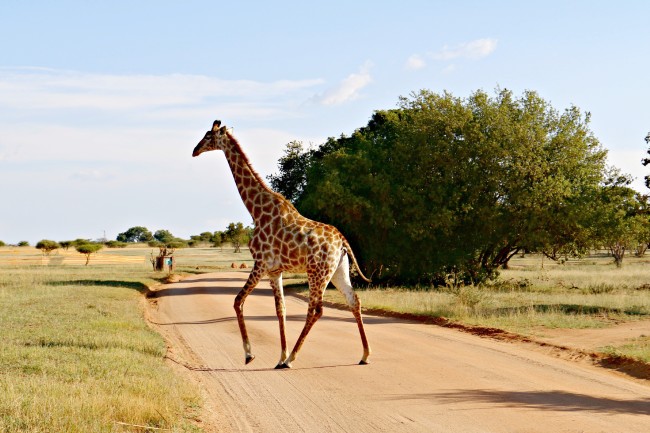 We spent most of the week driving ourselves through the park.  Usually early mornings and around dusk, which were the two times of day the animals are most likely to be out and about. The best thing about safari drives is that every one is different, you just never know what’s going to happen or what you’re going to see.  I could have driven through the park for hours, just staring out the window.  The bush is so magical.  It’s huge expanse of grass and trees reaches all the way to horizon, and at sunset, the sky is the same orangey red as the sand.  It’s quite spectacular.  The kids, however, could only manage and hour or so before they needed to get out and stretch their legs.

They also loved the freedom of not having to wear a seatbelt in the car.  On a couple of game drives we had all the kids, including their cousins, in back of the car with the seats folded down.  There was so much giggling and singing and animal spotting.  It’s something they are going to remember for lifetime. 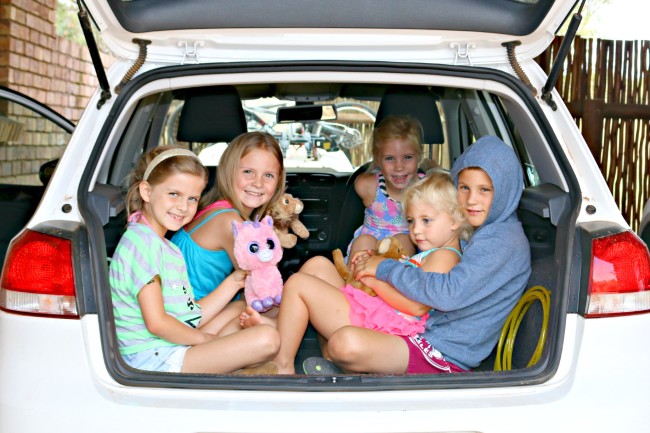 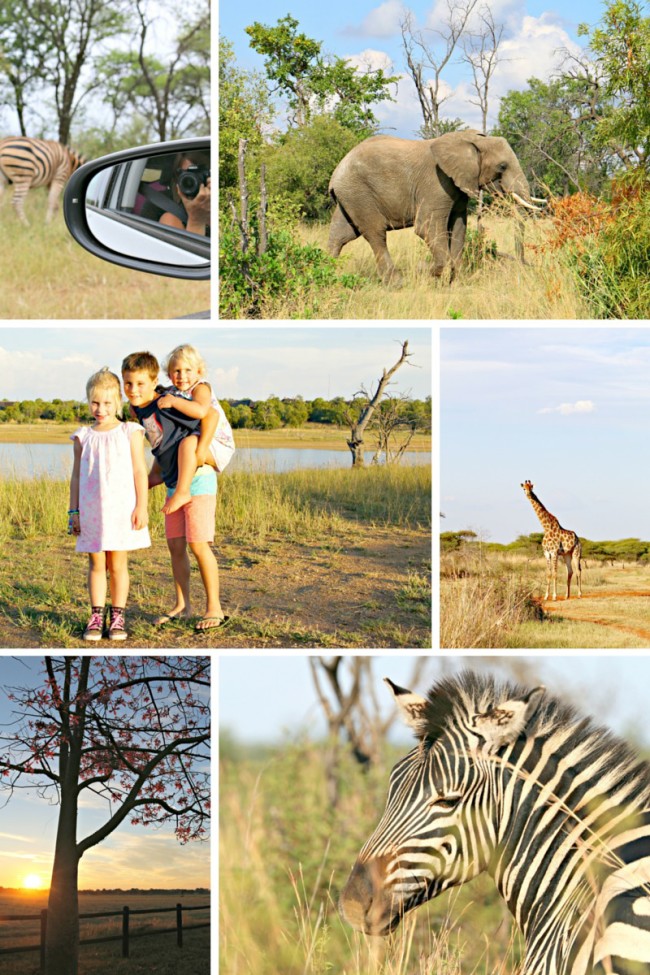 The game park we were staying at didn’t have any lions or rhinos which meant that we were able to get out of the car and walk around (at our own risk of course).  This was amazing and something I’ve never done before.  I still couldn’t help feeling a little on edge though, as all the animals are totally wild and you just never know what’s going to come out from behind a tree.

One afternoon we were got out of the car to watch a light aircraft do loops in the air.  It was apparently practising for an upcoming air show.  We were standing right next to the runway and watched it take off. The kids were waving madly and the pilot was waving back – so cool.  A couple of giraffe just happened to be munching on some acacia trees a few hundred foot away too, and Josh decided he wanted a closer look.  I had my camera ready to get the ‘perfect shot’ of my boy in Africa, when all of sudden he leapt into the air and started screaming!  A look of sheer panic etched across his face.  I got the fright of my life, (as I said, you never know what’s lurking in the grass). I dropped my camera and starting running towards him, half expecting us to get tacked to the ground by something wild.  As I got closer I heard what he was actually yelling……. “ANTS!!! ANTS!!!!” 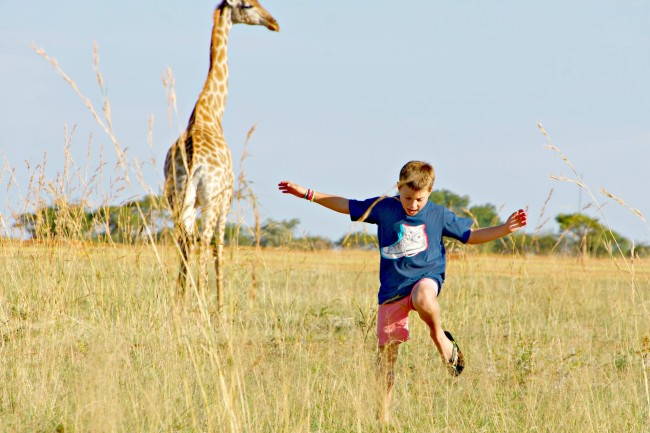 Once I realised that we weren’t about to get eaten alive, I almost collapsed on the grass, laughing!! Poor Josh, he’s watched too many Deadly 60’s on TV and genuinely thought he was being attached by poisonous bull ants (which of course only live in Australia).  I turned around to tell Mr D that the crisis was over, but he and others had already realised and were almost crying with laughter too.  I guess you had to be there, but it really was hilarious.  Oh and my camera survived and I still managed to get a nice shot of him with the giraffe. 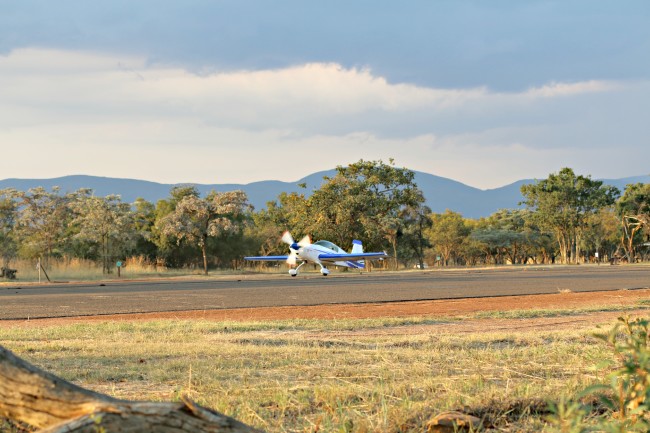 One afternoon we decided to go on a proper safari in one of those big 4×4 jeep things.  The two rangers taking us were still students, training to be fully fledged game rangers.  Mr D took and Josh were very impressed with their performance before we even left the lodge because they knew all about rugby (tick for Josh) and they let Mr D take a 6 pack with him.

We set off in just before sunset. Unfortunately we didn’t make it very far before the jeep broke down! Those poor students…. they were mortified, and the couple of American tourists who were with us clearly felt very uneasy about being stranded in the bush.  My kids (who now thought they were bush babies) jumped out and went for a little wonder down the track.  One of the students took them a little way into the grass and showed them some animal foot prints and a dung beetle rolling a HUGE ball of poo.  The other poor student was left with his head under the bonnet of the jeep trying to get it going again. 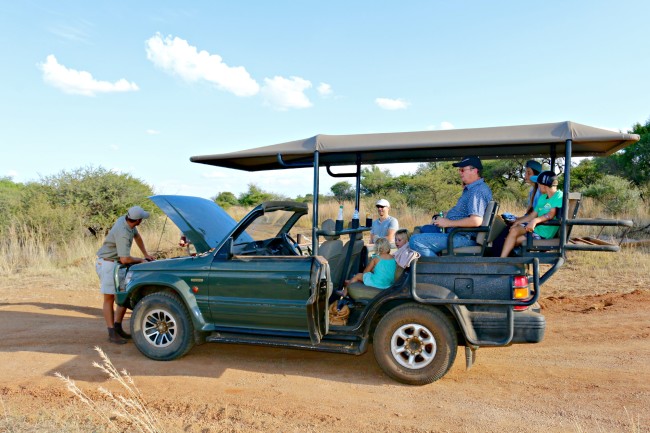 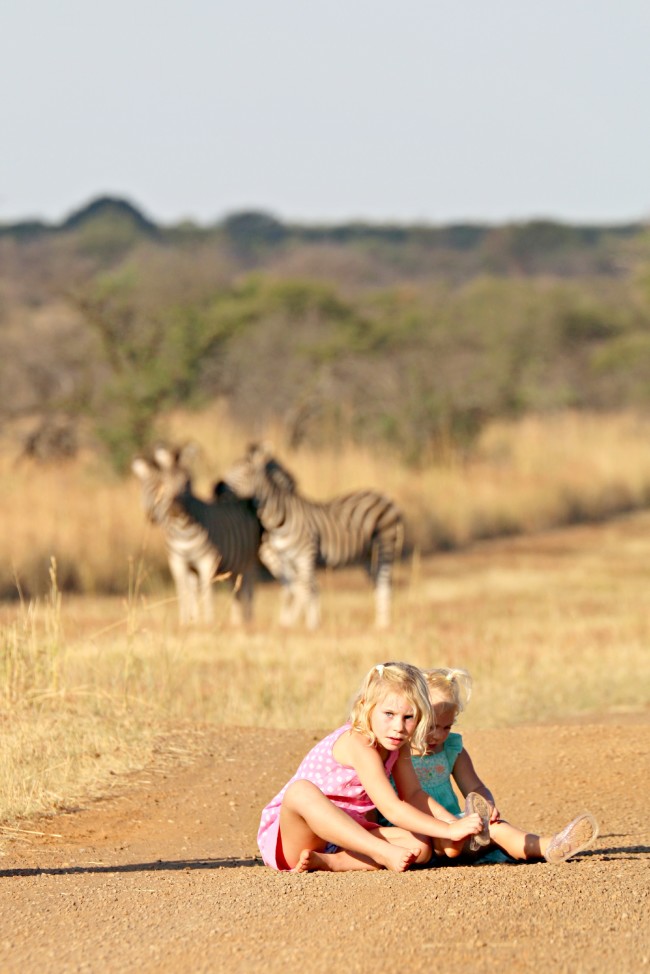 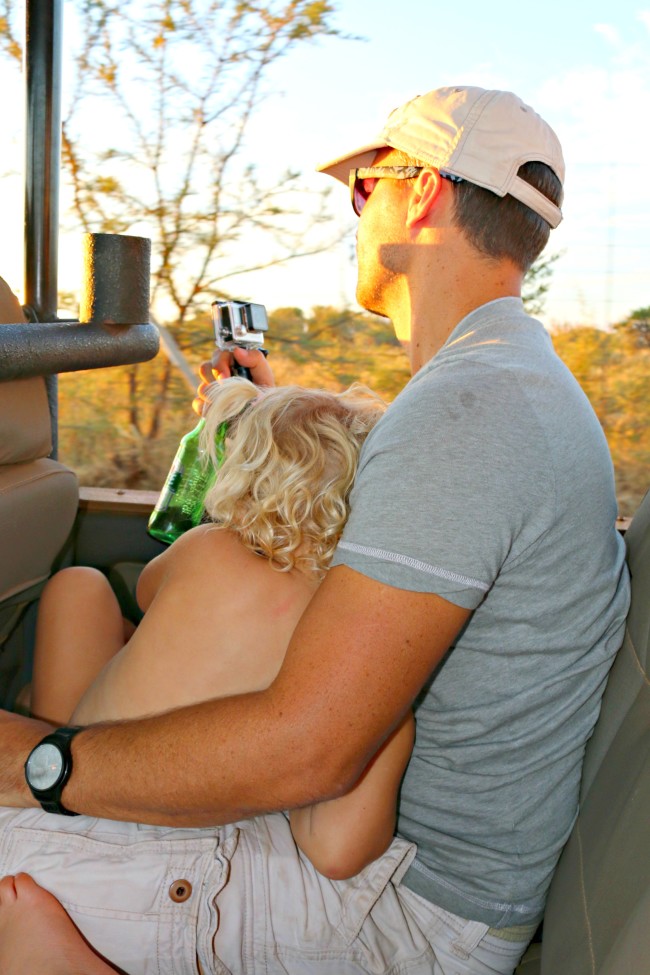 Even though we didn’t see too many big animals that afternoon, the kids still learnt so much about the bush.

What a magical week we had.  Africa I really do love you.

Have you ever been on an African Safari before?