After a rather perfect start to our summer camping trip to Nambucca Heads, things started to look a little sketchy!!  When I ‘things’ started to look a bit sketchy, it was actually just the sky, and as any camper will know, a black sky in the middle of the day is not good news!!  Mother Nature definitely had it in for us as the biggest band of dark cloud swallowed up the day faster than we were prepared for. 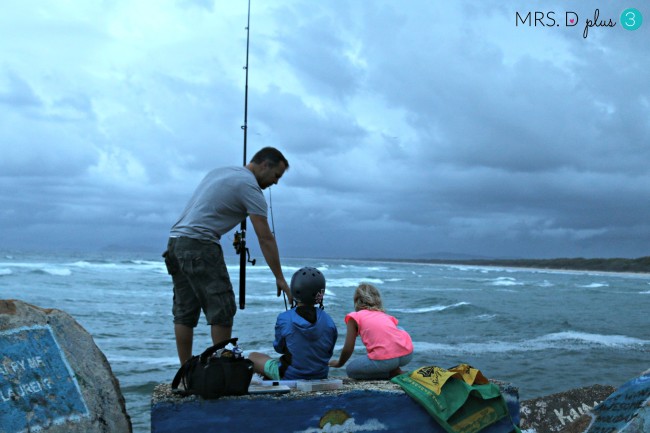 Rain when living in a tent is probably one of my biggest camping fears (just behind snakes slithering into the tent while I’m asleep).

The forecast looked diabolical, but holiday denial had set in, and we were all convinced it would just be a passing shower.  Maybe a little thunderstorm but nothing we couldn’t handle. GULP!!

The first storm hit and it was pretty spectacular.  After the initial mad panic to get all of our stuff undercover, we sat back and took it all in.  Wine definitely helped and a lot of laughs.  The lightning strikes over the ocean were beautiful to watch and once they had passed the kids were out jumping in puddles and running in the rain. 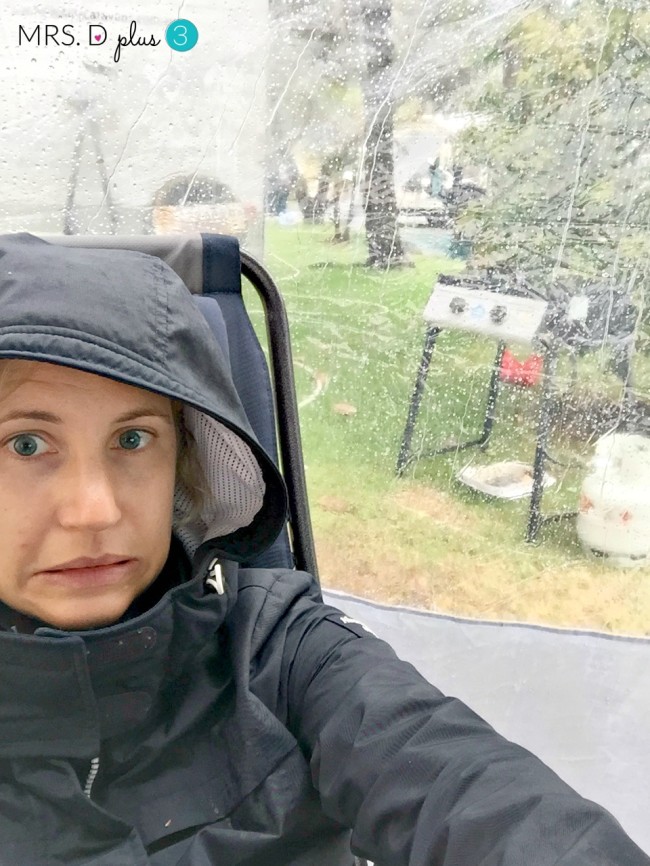 “This is not so bad at all” I though, “I can do this!” especially as the sun came out and pretty much dried everything out again.  The boys even managed a bit of fishing in the rain.

The second storm hit us shortly after breakfast the next morning and it was not just a passing one this time!  It was the mother of all storms.  I was in the camp kitchen and the sudden sound of the rain thundering down onto the tin roof nearly sent me into cardiac arrest. 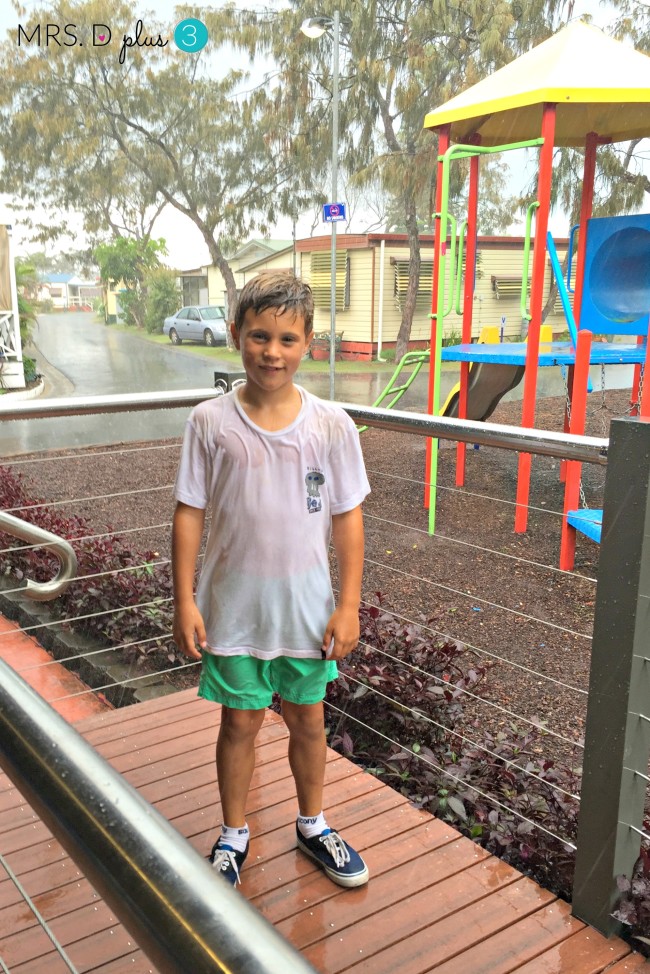 I couldn’t see what was happening at our camp site but I could only imagine (and it wasn’t pretty)!!  The rain hammered down and I just sat and watched it.  There was no way I was leaving my dry spot for anything.  After about 15 minutes (with no sign of the rain easing up) Master J came rushing into the camp kitchen.  He was soaked to the bone, but with the biggest grin on his face.  “Dad sent me to check on you Mum”.  At least he’d remembered me!

The rain eased a little and I made it back to the tent.  Everything were starting to look very soggy.  We had been caught so unawares with this one, that I hadn’t managed to get any of the washing or towels undercover in time.  Being wet with no dry towels in not fun at all.

We bundled the kids into the car and headed into Coffs Harbour in search of some dry entertainment. We managed lunch and an ice-cream under some very crowded shelter.  Clearly we weren’t the only ones trying to stay out of the rain.

That night, as the rain continued to fall, things were starting to look a little bleak.  Fortunately I managed to get a decent sleep (slightly aided by a large number of gin and tonics).  However when we woke up the next morning, our beautiful teepee tent had transformed itself into a swimming pool! 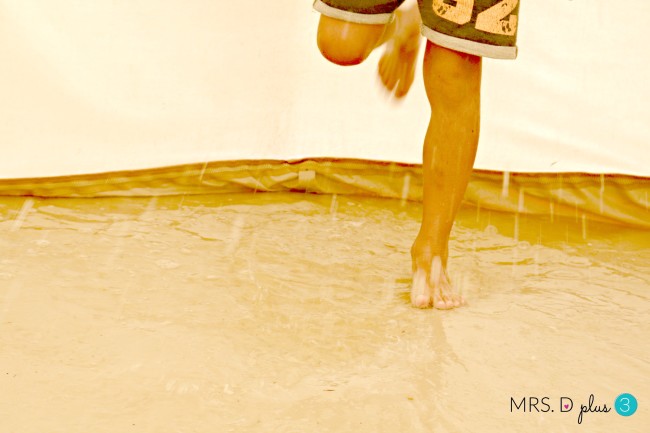 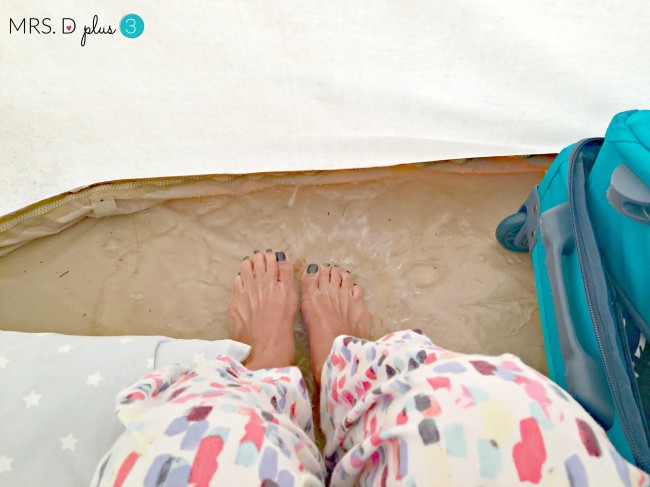 That was it.  Game over for me!  We pulled the trailer under cover and literally threw everything into it, before bundling everyone into the car and heading home.  Sadly the tent did not come too.  We were pretty gutted to be leaving early but at least we’d had a laugh. 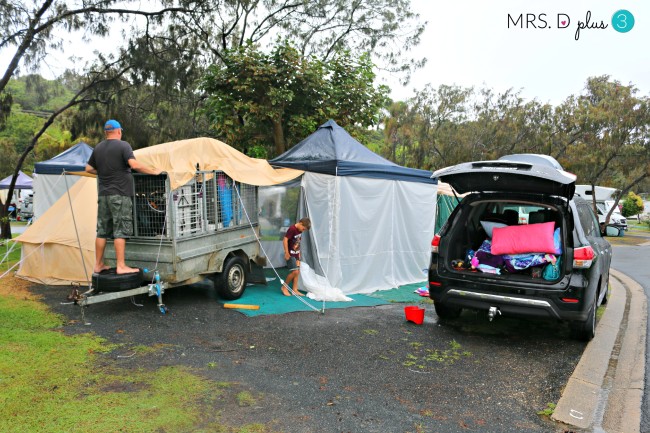 So would I go camping again??  Yes!  Despite the rain we actually had a fabulous time and I can totally get why it’s a great family holiday.  Here’s a little video I made.

Would I ever sleep in a tent again?  Absolutely not!!  The friends that we were camping with had a camper tailer and they were NOT rained out.

We’re now on the lookout for a good camper trailer too. After the last big debate we had on what to buy, Mr D has forbidden me to be involved in the choosing of it.  I’ll still be packing my bunting and fairy lights though.

Do you have a camper trailer?  What would you recommend?

15 comments on “Our Camping Adventures at Nambucca Heads (part 2)”