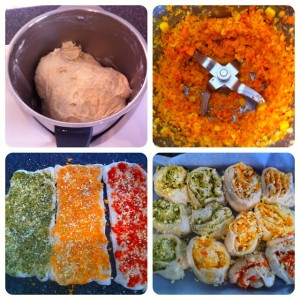 I will happily admit that I am hopeless in the kitchen.  To the point where I have (on several occasions) been known to burn a pot of water!!  I’ve always liked the idea of cooking but just never really managed anything other than a good old spag bol or a meat and three veg type of meal!  I am pretty awesome at baking though, but I have to be honest and give most of the credit to Betty Crocker!

This week I have had so much fun with my new Thermomix.  It’s like having a beautiful silk orchid in the window – no matter what you do, you just can’t kill it!  I made these fabulously fun scrolls for the kids dinner one evening and they loved them.  They worked perfectly for lunch boxes the next day too.  So here’s the recipe for those of you that fancy giving it a go – I PROMISE you won’t go wrong!

Starting with the dough: (I still can’t get over how easy it is)

The fillings are just as easy too.  As I’m doing traffic lights, I needed red, yellow and green, but really you could mix up anything you like!
Red
Yellow
Green
This whole process should take you no more than 5 minutes, so you have plenty of time for a cup of tea or in my case a load of washing and a Kindergarden home reader, before you need to turn the oven on to 180 degrees to preheat. 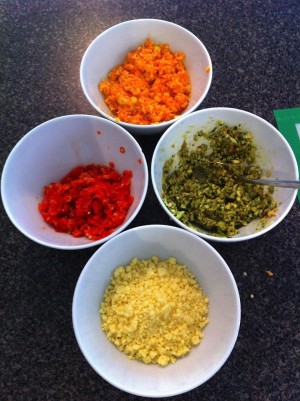 Final Prep:
So easy to prepare and the kids loved them!  Mr D was happy not have ham sandwiches in his lunchbox the next day too!

2 comments on “Traffic Light Scrolls in the thermomix”