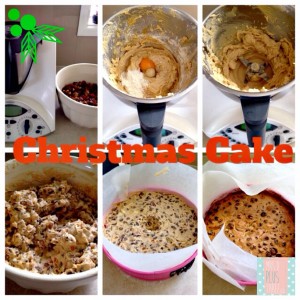 I’ve always wanted to make a proper Christmas Cake from scratch but it’s always seemed a bit ambitious for me! And besides, my mum has always made the Christmas Cake and it just seems like a ‘mummy’ thing to do at Christmas.  Newsflash……. I am the mummy now – eeeek!!!  Seems a bit surreal when I say it like that.  Do you have anything that you still think of as ‘a job for mum’ – but YOU ARE the mum??

My mum is coming to Sydney for Christmas this year (Yipeeee), so I though I had better make an effort and get this Christmas Cake baked.  I decided to make Nigella Lawson’s Christmas cake recipe in the thermomix, because really – you can’t beat Nigella at Christmas time!

I opened up the book and the first sentence said ‘This cake should be made about 3 months prior to Christmas Day”.  OOOOPS!!  Well that’s a fail before I’ve even started!  I bet my mum knew that!!

The reason you have to make it so early is that is needs to be fed with a little brandy every week until Christmas.  I figured if I just fed it a little extra then I’d be just fine making it now (I hope).

So here goes…… (Oh and although I have used my thermomix, I didn’t really need it this time, so this recipe can quite easily be made without it).

I really enjoyed making this cake and it was much easier than I initially thought.  Unfortunately I won’t be able to tell you how it tastes until after Christmas, but I am quietly optimistic.  To finish it off,  I’ll firstly put a layer of apricot jam over it, followed by a layer of marzipan (my favourite part) and then finally some white Royal Icing.

*Just adding a little update.  We’re now a year later and I have just finishing making my cake for the second time around.  It was absolutely amazing last year and I can’t wait to tuck in again.  It worked best with some delicious brandy custard.  Although Mr D and my dad preferred it with ice-cream.

Have you made your Christmas cake yet?