Baking, Thermomix Recipes
I saw an idea on Pinterest to bake cupcakes inside ice-cream cones!  As baking cupcakes is Miss H’s MOST favourite thing to do, I thought we could give these as go – as something a little different!!  Master J (who is not normally interested in baking) also thought they were a great idea 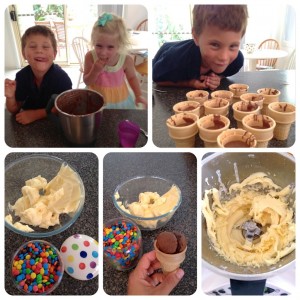 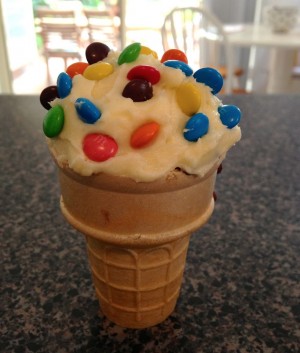 Now I’m sure you could get these little ice-creams looking far more professional and perfect if you used an icing bag and piped it on properly (and then stuck a sneaky chocolate flake in the side).  However, my kiddies though these were the bomb!!  They tasted pretty good too (not that I broke my diet to sample one *wink wink*).

I used a really easy peasy chocolate cake recipe with buttercream icing.  The recipe has been Thermomixed as I’m a hopeless cook without it.

Next, pour the cake mix evenly into ice-cream cones.  (Obviously don’t use the pointy ones).  Don’t fill them all the way to the top – only about 3/4 as the cakes will rise in the oven.  This recipe will make about 12 ice-cream cones. 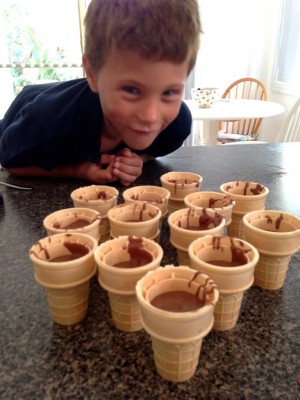 Place the cakes into the oven for approximately 20 minutes.  Give the thermomix a quick rinse by placing about 300g water into the bowl and mixing it on speed 10 for 20 seconds.  Now you’re ready for the icing.

Add all other ingredients and blend for 20 seconds on speed 8. 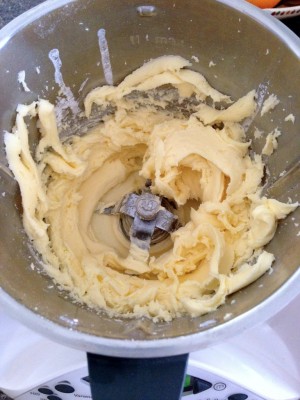 I have made vanilla buttercream to make it look like ice-cream, but you could of course add a drop or two of any food colour to change the look!

The next bit is the fun bit and if you like things to be perfect (and like me, have a tiny bit of OCD), then I advise you now to step out of the kitchen and leave the kids to it!!

Make sure the cakes have cooled down completely before attempting the icing.  Buttercream will just melt if it is put on something too hot! 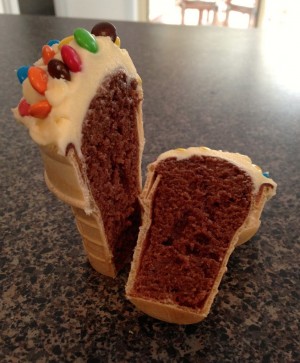 And there you have it!  Cup cake ice-creams!!  They really were delicious…

11 comments on “Ice-cream cup cakes in the thermomix”