“What’s that??” Miss H asks, as I hand her a cup of bright green juice.  “It’s a green smoothie” I tell her “It’s SO yummy!”  “I don’t like it!” she replies, rather bluntly.  “I want my milk!”  “But you haven’t even tried it yet – it’s super yummy!  It has apples in it……..” I’m trying my best to coax her into trying a little sip.  “I don’t like it!” she tells me again – equally as bluntly but with a slight whine in her voice.   I just know that if I persist, that whine is going to turn into a high pitched wail and I really can’t be doing with that on the first morning that I’ve switched from coffee to ‘green smoothies’.  So I try Master J instead and surprisingly he necks the whole cup!!  “That was yum mum!  What was it?”  “Green smoothie!” I tell him”.  It helps to clean your tummy making you nice and healthy and extra clever, so we have to drink it every morning.  Just like brushing your teeth.”  “Oh, ok” he says!  Just like that!!

On New Years day I decided to join up and do the 30 day Green Smoothie Challenge. 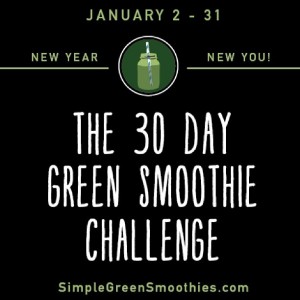 If you were wondering?????  The smoothies I’ve made so far have actually been delicious!  I was a little sceptical about putting ‘veggies’ in my smoothies and thought I might have to drink a few while holding my nose (a trick I learnt as a kid to block out the taste of yucky foods).  However, I’ve been so surprised by how delicious they are that not only have I started to get braver with my ingredients but I think I might keep this 30 day habit for a little longer – maybe even forever!!

I’ve had several requests from my lovely readers for the recipes, so here are a few.  I’ve just made my recipes up, so you’ll have to just trust me that they taste good.   You can always try the simple Green Smoothie website for some ‘proper’ recipes if you’d prefer.

I’ve used my thermomix, but you don’t have one, a good blender will do. 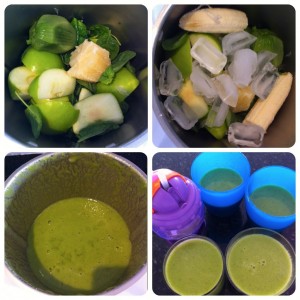 This once can taste a little ‘lettucy” so if you prefer just use 1 bok choy.  The kids are my taste testers – if they complain, then it may need tweaking.  There have been no complaints so far!!

We called this one the rainbow because the blueberries and carrot made it look a little ‘off colour’ and not so ‘green’. 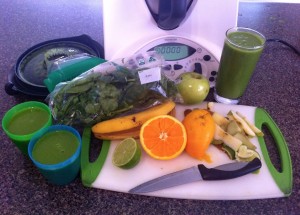 What a great challenge this has been.  We are only a week in and I already feel better for it.  It also fills the kids tummies up, meaning that they can go longer after their brekkie and are not whinging for treats by mid-morning!  An all round win.  (I’ll let you know at the end of the month if I’ve managed to loose any of that super stubborn baby weight – now that would be a bonus!)

Why not try it – you don’t need to stick to just stick to January!!  Just do it!