Seasonal, Thermomix Recipes
I probably should have posted this recipe before Easter but I just wasn’t organised enough (story of my life).  Mr D has been off work for the last week (to spend some time with his parents who are visiting us from South Africa), and although it has been fantastic having him around, it has really thrown my routine straight out of the window!!!  I don’t realise how much I rely on it until its not there.
We had one of the loveliest Easter’s I can remember this year.  The weather was beautiful, the kids were beyond excited with what the bunny left them (which we had to go and hunt for at the crack of dawn I might add), and we had the most relaxing day with great friends at the lake.
I even managed to make some Easter Bunny Cupcakes to take on our Easter picnic, which was very organised of me don’t you think? (I only had the time because the kids had me up SOOO early to see if the Easter Bunny had made an appearance).  I just have to credit mymummydaze as I got the idea from a picture I saw on her instagram feed.
So here is the recipe!  I tried to make it kind of healthy (especially as we were all stuffed full of chocolate).
Ingredients:
300g peeled carrots
150g butter
100g rapadura or soft dark brown sugar
100g refined caster sugar (I made mine by whizzing raw sugar in the thermomix for 3 secs on speed 9)
3 eggs
3 tsp baking powder
1 tsp nutmeg
2 tsp cinnamon
180g plain flour
Method: 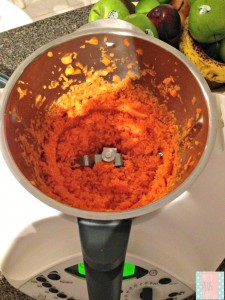 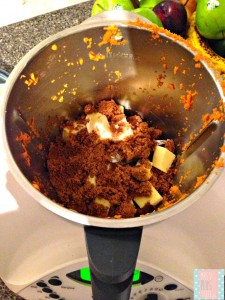 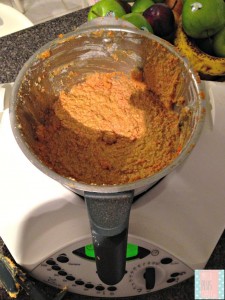 Icing and decoration (the fun bit):
I made vanilla buttercream icing by whizzing together 150g butter, 300g icing sugar, 1 tsp vanilla extract and 1 tbs of milk on speed 8 for 30 seconds.  If you wanted a healthier version you could also try using a cream cheese topping. 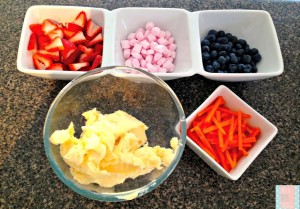 Miss H and I had tonnes of fun with the decorating and I was quite surprised at how much concentration she had.  We used sliced strawberries for the bunny’s ears, blueberries for it’s eyes, a little pink marshmallow for its nose and some thinly sliced carrot for the whiskers.

We took the bunny cupcakes down to the lake for our Easter picnic and they were a great hit.  Granny de Beer said they were the best cupcakes she has EVER had!! (and that’s a major compliment believe me). The only criticism was had was from Master J – “They don’t look like bunnies!  They look like cats!” he said.  “THEY ARE NOT CATS, THEY’RE BUNNIES!!!!!!!!” was Miss H’s reply (with a stamped foot!!!!!)