Personal
The best thing about this week has been losing the Christmas tree that was growing in the back garden.  Ever since we’ve moved in I’ve hated it.  We have a relatively small patch of garden outside the kids bedroom and this Christmas Tree (well at least that’s what it looks like) is right smack in the middle, making it almost impossible to use the garden properly.  I know I may sound a bit harsh taking such a dislike to a poor Christmas Tree, but this one really wasn’t a pretty looking tree like the ones you have in your home at Christmas time.  It was more like one from the “Grinch that stole Christmas”.  It was HUGE and really ugly and it look up so much room that it literally blocked out the sky.  When I stood out in the garden and looked up it was really dark and creepy up there with loads of dead, sticky branches that looked like they would make the perfect home for many unwanted crawlies!!
It’s no easy thing getting a tree taken down in Sydney, in fact it’s actually a bit of a mission, as all trees (even the ugly annoying ones) are protected by the council.  So much so, that you’re not even allowed to prune anything back more than 10%!  I guess this is ok if you’re a garden lover and take care to prune your garden back every year so that you only need to take off 10%, but when you’ve in a rented property that clearly has not been nurtured for a long time this rule can be a bit of an issue.  Well, certainly to me anyway!  I must have inherited both my grandmother and my mother’s genes as all I want to do is get out there with a huge pair of scissors and chop everything back (or at least supervise Pete doing it).  So we did a little more research and discovered that the only way the council would find out of we did some major chopping was if one of the neighbour’s complained.  Perfect, our neighbour’s are hardly spring chickens and with a bit of buttering up they’d be just fine!! 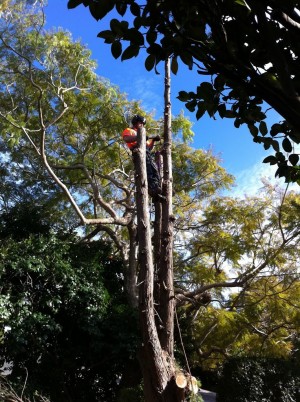 The next problem we had was getting rid of the evidence!!  The council only picks up “green things” once a fortnight and as we had about 10 times the amount that would fit one bin, this was method was going to be a problem.  We couldn’t drive it to the dump either because if you’re not a ‘home owner’ with a permit it costs a fortune to visit the dump.  And besides there was no way those trees cutting were going in my car  – if any spider escaped and decided to make an appearance whilst I was driving somewhere there would be a high chance of a serious accident!!  So back to the drawing board I went and I discovered (thanks to neighbourhood gossip) that a couple of trees on the edge of the garden were actually on council properly and if I phoned the council and complained that they were blocking our light (or something like that) they’d have to come and cut them down.  Luckily for me they agree and when the lovely young lads arrived a week later to do the honors, I made sure I was there with tea and biscuits.   So when I very kindly asked them if they could just take away some of my ‘clippings’ when they cleared up, they were happy to help!  Result!  If only it had been that easy in England!!
The only thing now left to spoil the garden was that damned Christmas Tree.  After much negotiation with the landlord, estate agent and the council, they finally agreed to have it chopped down!  At 7:00 am on Tuesday three young lads arrived with a huge truck, chainsaws and a chipper machine!!  For someone who was supposedly not interested in ‘the big tree chop’, J was dressed and outside within minutes of them arriving. (Wish he’s get dressed that quickly every day!).  I might add that he was wearing his fireman suit as this is obviously the most suitable attire for tree chopping – especially as it had a hard hat!  Mr D was also very reluctant to go to work and was hovering around muttering something about ‘working from home’.  Yeah right, he’d never have got any real work done if he had stayed home.
It took them the best part of a whole morning to cut down not one but three horrible trees!!  The poor guys were incredibly patient too – having to stop every 10 minutes to answer another one of J’s questions and to let him throw the odd branch into the chipper.  Much to his excitement one lad even found a huntsman spider up the tree and brought it down in his hard hat to show J.  “Mum, mum you have to come and see this spider” he calls “it’s so cool – it’s a huntsman, come look mum!”  “Oh great” I think, I just knew there were horrible things living up that tree”.  Even though I was expecting to see the spider it still made me almost jump 6 feet off the ground (much to everyones amusement I might add).  I can now say that I have officially seen a huntsman and I do not want to see another!!  I also needed eyes the back of my head too, as while trying my best to avoid anything that crawled as well as make sure that J didn’t loose an entire arm down the nashing jaws of the chipper, Miss H did her best disappearing act leaving me frantically searching for her under piles of branches while someone was yelling “TIMBER!!!” in the background!!  Enough to get anyones heart racing!
Once everything was cleared up I was totally amazed by how much more light was in the garden (and flooding though the house).  I could actually see the sky!!  The only thing that is now posing a problem is the grass – or lack of it!!!!!  Those of you that know Mr D and his mild obsession with ‘perfectly level lawns’ will know that this is now a challenge not to be taken lightly!  Watch out visitors, you may be put to work……………….
| 0 comment