Miss H is very into weddings and ‘marrying’ at the moment and poor Mr D has had to get down on one knee and propose at least 15 times over the last couple of weeks.  “Again Daddy!” she squeals “Lets do  marrying and you have to be the handsome prince”.

It’s all come from a combination of watching Cinderella on TV too many times (it’s the current favourite movie – and thank god we’ve moved on from Dora!) and watching Mr D and I tied the knot.  I got our wedding DVD out for her a few weeks ago and she has been memorised by it.  I haven’t watched it for a few years now and when I first put it on for her, I ended up bawling my eyes out.  “Why are you crying mummy” Miss H asked me curiously “they’re just happy tears honey” I tell her.  She looked a bit confused, but thankfully accepts that and then goes on to say “Mummy, you were a real princess!!” (which of course sets me off again!!)

Planning a wedding is such a huge task and looking back through my photos I can honestly say that it was everything I wanted it to be.

Although I’ve lived in England for over 20 years,  both Mr D and I were born in South Africa so there was really no doubt that that was where we wanted to get married.  I had my heart set on a place called “Granny Mouse’s Country House”.  It is just around the corner from where my grandparent still live and I have such vivid memories of playing in the Chapel and marrying my Barbie’s there when I was a little girl.

Mr D and I flew out to South Africa to hunt for the ‘perfect wedding venue’ but I knew all along that it would be at Granny Mouse.  Even Mr D fell in love with it with he saw it.

My flowers were an obvious choice too as my Grandpa is a farmer and has a beautiful protea farm just around the corner from Granny Mouse.  The entire colour scheme of the wedding was based around these beautiful flowers.  It was so special knowing that my wedding bouquet were full of grandpa’s flowers.

After  a year of careful planning and several trip back and forth to South Africa from England, our big day finally arrived.  I had told Mr D that the ONE thing I really, really didnt want on our wedding day was rain!  And boy oh boy DID IT RAIN!!!!!!!  Not just any rain, but the biggest and heaviest downpour you can possibly imagine.  The sky went as black as night, there were hailstones bigger than marbles tumbling out the sky and water was rushing down past the Chapel in small rivers.  In fact I believe the Chapel was actually leaking!!

Our ceremony was due to start at 3pm and of course that is exactly when the thunderstorm arrived!!  (Funny actually as that is the time  Master J finishes school and if its going to rain it will almost always be at 3pm!!).  So I didn’t actually arrive at the Chapel until almost 4pm, when the rain disappeared almost as quickly as it appeared.  A typical African thunderstorm!  You would never have guessed that it had been the most spectacular morning of sunshine while we were all getting ready, and luckily I managed to sneak in a few of our photos before the sky turned black. 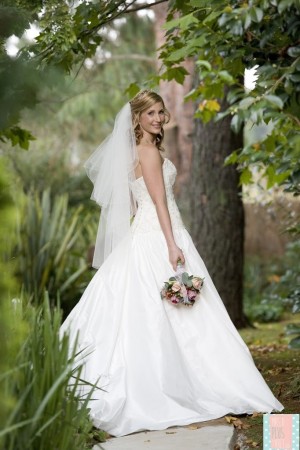 I’m really not a big fan of my ‘self portrait’ or ‘selfie’ as its called these days (I’m too self critical), but I do love this one.  My dress was hand made by a lady in Australia (way before we ever knew we would be living here) and it had to be sent all the way to England, only to be packed away and flown all the way to South Africa.

I was a bundle of nerves by the time I got to walk down the isle.  My dad whispered “are you ready?” and as I looked over at him to say “Yes” I saw that he had tears streaming down his face!  “OH god, not now, not now, not now”I thought – biting my tongue to stop my own tears from making my mascara run down my face like the rain!  It was one of the hundreds of ‘moments’ from that day which will stay with me forever.

The ceremony it’s-self will always make us laugh!!  It was comedy to the core (unintentionally I might add).  The minister that I had prepared everything with pulled out at the last minute and sent a replacement on the day (who neither of us had met before).  We only found out when he arrived that morning so there was really very little we could have done about it.  It was only the second wedding he had ever performed and he clearly didn’t have a clue!  When repeating my vows (which just seemed to go on and on and on and on and on) he said “Will you promise to make Mr D his breakfast every day for the rest of his life”.  SILENCE!!  I didn’t answer because I thought he was trying to make some kind of joke (I could also hear my bridesmaids sniggering behind me, making it very hard for me to keep a straight face).  After what felt like a looooong silence, I realised that he actually wasn’t joking!!  So one of my (many) vows was to make Mr D his breakfast every day.  Unfortunately (for Mr D) I have just not managed to keep this one – Ooops!!

He then finished off by saying “With the power invested in me, and in God and in Jacob Zuma (the South African president)  I now pronounce you husband and wife.  I kid you not!!  There were several other classic’s that he threw in there too, but those stories can wait for another day. 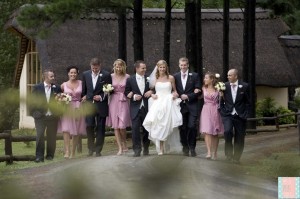 There is not a single thing I would change about our wedding day, making it truly perfect.  It wasn’t just the day that was perfect but the people that came too!  I can honestly say that our wedding party were AMAZING and I will be eternally grateful to them all (especially my mum and my girls).

To top it all off we were featured in the UK Magazine “Wedding Flowers” under their real life wedding feature. 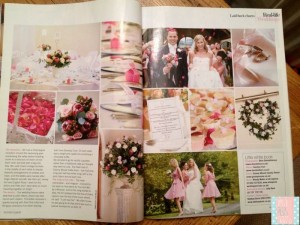 What do you remember most about your wedding day??