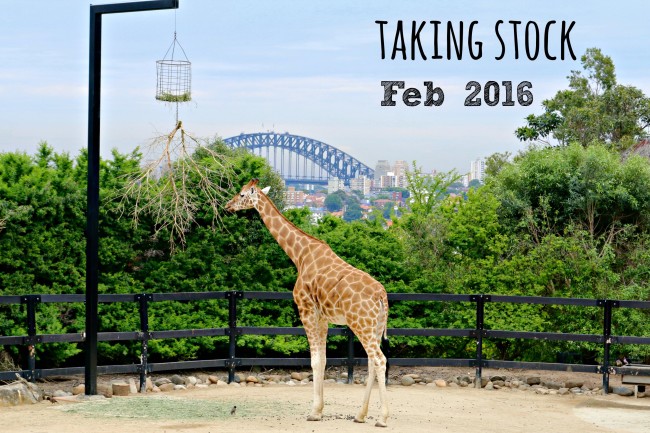 I had hoped to do one of these taking stock posts every month this year, but sadly I’ve already missed January.   In my mind January is a bit of a right off anyway because the kids are on school holidays for most the month, which means I have pretty much no time to myself.

So I’m going to start with February and here it is.

Making: Weekly schedules and morning routine charts for my two big kids.  I’m tired of sounding like a broken record day in and day out!! Lets hope they work. 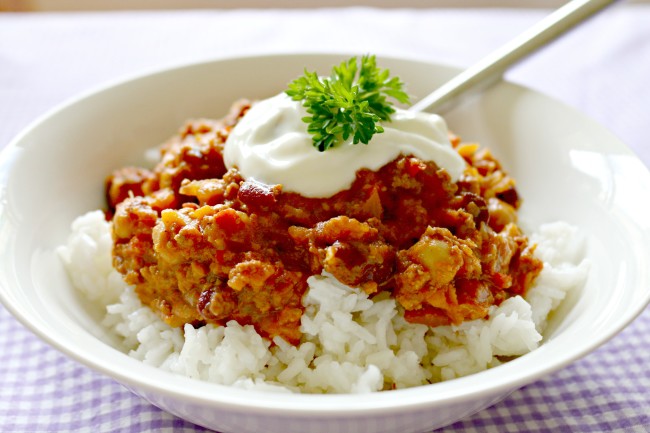 Drinking: A banana and mango protein smoothie.  It’s my new favourite lunch obsession, especially on days like today when it feels like a gazillion degrees outside.  They’re so easy to make:
* 1 frozen banana
* A small handful of frozen mango cubes.
* One and a half cups of cold water or coconut water
* 1 large scoop of vanilla protein powder
* 1 tbs plain yogurt.
*  Whizz together for about 1 minute and enjoy.

Reading: Gretchin Rubin’s ‘Better than before’.  It all about choosing habits that make you happy and how to stick to them.  I highly recommend it.

Wanting:  To switch the air con on already.

Looking: Forward to the weekend.  We have a few clear Saturdays coming up before the winter sports season kicks off and it’s just blissful.

Marvelling: At how big my babies are getting.  I’m almost the parent of a pre-teen and I have just finished filling out HIGH SCHOOL applications!!!!!!  How did that happen?
I’m well and truly out of the ‘baby stage’ now and if I’m honest I’m pretty happy about it.  Not that I don’t think babies and toddlers are super cute,  but they can be hellishingly hard work. I’m going to wallow in this little window of harmony before the the next big parenting stage hits me. 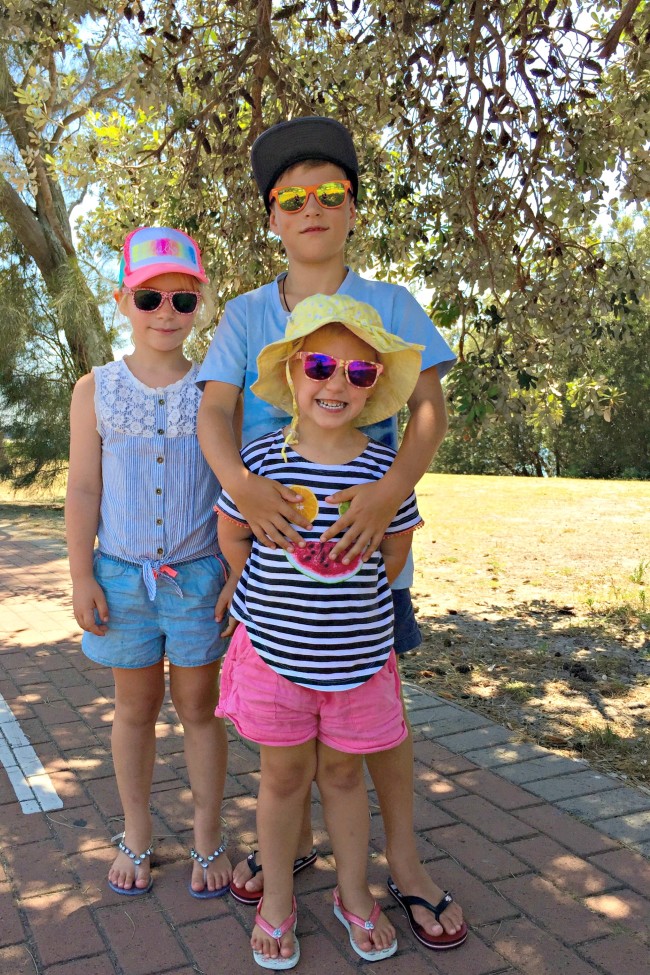 Playing:  Cat and mouse with a friend of mine.  We keep missing each others calls and have been playing tag on voice mail for days now.

Deciding:  On whether or not we need a second car?  We sold ours a couple of years ago because we hardly used it and it was costing too much money.  We’ve managed perfectly with only one car until now……

Wishing:  That saving money wasn’t such a lengthly process!

Snacking: I’m trying not too.

Waiting:  For my moisturiser to arrive in the post from Strawberrynet.com.  I left it a little late to order this month and now I’ve run out.  My face feels like a dried up apricot!!

Liking:  The new teachers my kids have this year at school.  I met them last night at a parents info evening and I got such a good vibe from them both.  I have a feeling this year is going to be a great one.

Loving:  The fact that my boot has come off.  I broke a bone on the top of my foot a few weeks ago.  It’s been torture lugging that stupid boot around for the last 4 weeks, especially in this heat.  Having both my feet back it totally liberating. 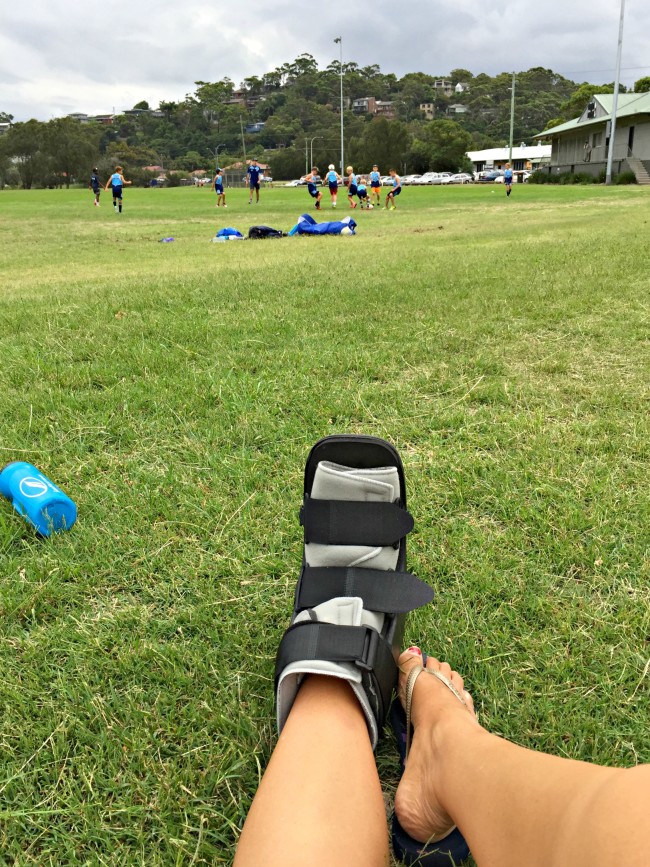 Considering: Whether or not to volunteer myself as a class parent this year.

Watching: Packed to the Rafters.  I know it’s a really old series, but I’ve only just discovered it on Presto TV and I’m hooked.

Needing:  To see a dietician.  I’m just so tired at the moment and I can’t work out why? Hopefully they can shed some light on the situation. 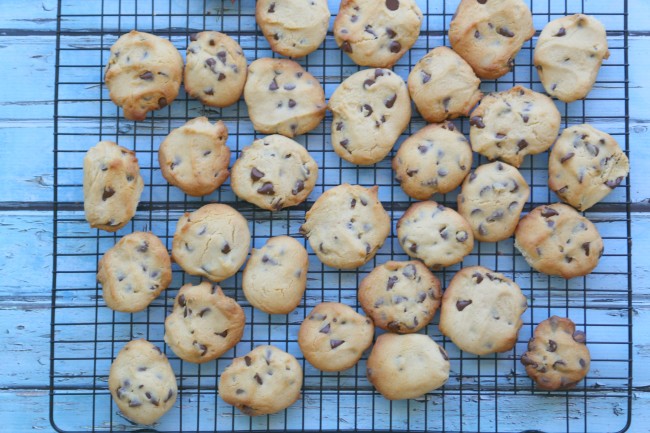 Wearing: Shorts and a singlet.  Pretty much my staple for this time of the year.

Following: Babs at Patchwork Cactus.  I’m loving her blog at the moment.  You should check her out, she’s such a darling and all kinds of cool.

Noticing: How competitive some parents can be when it comes to kids sports.  J has been playing quite a bit of competitive footy recently and I’ve found the whole thing a bit of an eye opener.  They are just kids at the end of the day, does there really need to be so much pressure and interference from parents? What are your thoughts?

Knowing: That this year we can apply for out Australian Citizenship.  It’ll be a big weight off our shoulders when we finally get those passports.

Thinking: That I really have to watch what I say around the kids.  They’re starting to pick up on things and repeating them at the most inappropriate moments.  Nothing is private anymore, unless I learn another language.  Maybe Mr D and I need some sort of secret parenting code?

Admiring:  My veggie patch.  My beetroots are almost ready to eat.  Who would have believed that I could have green fingers.  I think I’ve outdone myself.

Sorting:  My office.  I now have folders and lists for EVERYTHING and I’m a little smug about being so organise for a change.

Buying:  Not much.  Still sticking to that boring budget.

Hoping: That I get to England next year.  Fingers crossed.

Bookmarking:  Too many things.

Disliking:  The number of deadly spiders and snakes that seem to be lurking around at the moment.  They’re making me really jumpy and paranoid.  I think I need body armour to do the gardening.

Giggling:  I went for a walk around the block this morning and over heard an elderly couple having an argument.  I’m not sure what she said to him but his response was “I’ll take that wig and shove it up your ar***”.  HILARIOUS!!

Feeling: Mortified!  A new school mum gave J and I a lift home from the swim carnival the other day and the conversation between the two boys in the back came to sex (because apparently they are going to learn about it at school now that they’re in Year 4).  J goes on to tell the ‘new mum, we’ve only just met’ all about how I had explained sex to him……. not leaving out a single detail and adding in a few extras too!!!

Coveting:  A holiday that does not involve camping.  Not likely to happen though, as we’re taking the camper out again next weekend. 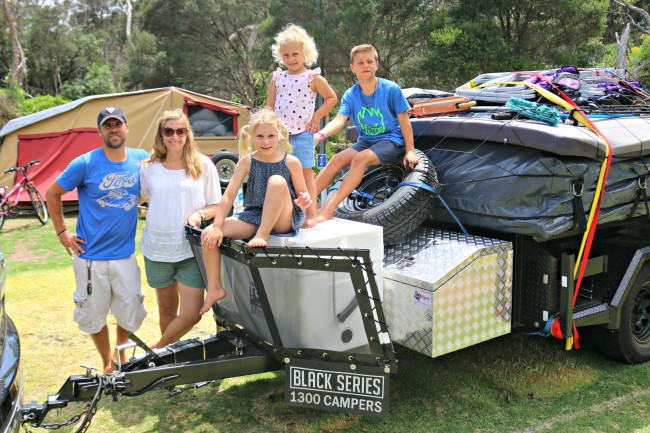 Hearing:  The amusing conversations the builders are having next door while they built the extension on my neighbours house.  I wonder if they realise I can hear every word?

I’d love to hear what you’re up to.  Copy and paste some of the prompts I’ve used and give it a go.  It’s actually quite fun and a great exercise in procrastination!