It’s Tuesday morning and I’m woken up yet again at 5:30am by the raw screaming of the wild Aussie cockatoo’s that sit outside our bedroom window.  It’s such a loud, distinctive scream that it would win any award for the worst alarm clock.  It’s also absolutely bucketing down with rain, and as I peer out the window all I can see is a blurred vision of the world.  However, I couldn’t be happier – just because it’s Tuesday!  Today, and every Tuesday (for the next few months anyway) I have between 9:30 and 3pm ALL TO MYSELF!

The last time I wrote anything on this blog was early December so I have a bit of catching up to do.  Going back a couple of months we had an email from our landlords advising us that they were putting the house, which we were finally calling home, on the market to sell.  I was gutted and very quickly went into a state of panic!   The thought of moving house (only 9 months after the big move from the UK) just made my stomach lurch – I just couldn’t face packing up AGAIN!!  And not just that, but my parents were due to arrive in a couple of weeks!  I had been looking forward to their arrival for months and the last thing I wanted to do while they were visiting was move!  There was also the small issue of my ever-growing bump was not getting smaller!!!
Slowly realising that my idea of moving into a lovely rental and staying there until we were ready for our next chapter was ever so slightly naive.  I had no choice but to throw myself back into the world of viewing houses.  Once again I found myself queuing up outside rental properties, with all the other prospective renters, being shown around by an estate agent with the enthusiasm of a sloth!!  I really did see some shockers and it still amazes me how some landlords can put their houses on the rental market in such truly revolting states.  But I guess you can do anything when you own a house in this little corner of paradise.  Eventually I found a very cute little house (I say little as it’s quite a bit smaller than what we had got used to) but it has the most perfect location.  It’s about 2km further down the coast from our old house on a narrow strip of land between Narrabeen Beach and Narrabeen Lake, with everything I could possibly need only a short stroll from the front door.
The only downside would be the unlikely even of a tsunami!!  And of course those damn cockatoo’s!!!!  As mentioned above, there is just no escaping the noise!   Not long after moving in we discovered that the old lady over the road was feeding them.  So at precisely between 5 -7am and 6- 7pm EVERY DAY about 40 to 50 of these large, screaming parrots descend around the house.   It’s quite fascinating to watch (for the first couple of times anyway) as they are just everywhere – they sit right outside her door waiting for her to bring the food out as well as gather in the trees, swing off the telephone wires, hop along the tops of cars…..and SCREAM!!!!!  We have decided that she must be deaf otherwise ‘why on earth would you encourage them??????” Especially so early in the mornings!!!!  Mr D got so desperate one evening that he went on to Google to see if he could find out how to get rid of them (without buying a shot gun of course).  He discovered that their only natural predator is a snake!!  So he and Master J decided to buy a rubber snake, attach it to a piece of string and lay it across the road, while hiding in a bush!!  Unfortunately I have to report that their plan did not work!!  Any other suggestions for plan B are most welcome though!! 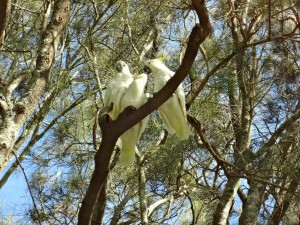 I suppose I should be grateful that I have not yet seen a spider in this house. Between the cockatoos, the rainbow lorikeets (beautiful but just as noisy), the kookaburra’s and not forgetting the Pelican, some days it really feels like we’re living in an avery!!  I should mention that I went outside the other day to collect some washing off the line, as the heavens had suddenly opened, only to find a rather large pelican just sitting on the patio table!  I swear it was bigger than Miss H and it gave me the fright of my life!

The move itself was a lot less dramatic than I had worked myself up to thinking it would be.  Thankfully Mum, Dad, LCJ and MT were all around to help.  I’m not sure it was exactly what they had bargained for on their trip to Sydney, but they were an amazing help!  We hired a van and two men to move everything from the one house to the next.   They arrived in a huge van that didn’t exactly look like it would pass any legal road-safety tests and neither of them spoke a word of English!!  As none of us spoke any Cantonese, there was a lot of hand signalling going on.  However, they were fantastic and moved everything over in a couple of hours!!  Unpacking was the interesting part with two alpha males in the house!  Mum and I had quite a few giggles!!!  Dad’s motto is “measure twice and cut once”, Mr D’s motto is “don’t bother measuring, just cut!”  We had to store quite a lot of stuff in the garage so you can only just imagine how the two of them organised it all!!!