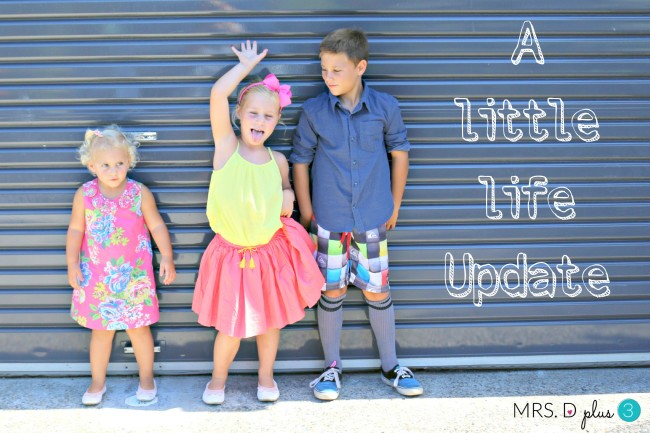 Life is just great at the moment.  I wouldn’t say it was fantastic…. because ‘ahem’ the budget, but other than that, everyone in my little family is happy and thriving.

I know life rolls in waves and we can’t be up all the time but right now, I’m riding the crest of that wave and I’m loving it.

There is really nothing out of the ordinary to report to be honest.  Everything is just ticking along as it should be.  Josh’s super strict teacher has turned out to be a blessing in disguise, and for the first time in three years he is actually doing his homework!!  Ok, I do I have ask him several times and there is still a lot of huffing and puffing, but on the whole we haven’t had one showdown!  A miracle!  Hollie is still as enthusiastic as ever with her homework, and although she struggles a little at times, she tries so hard it makes me so proud.  Miss Lexi-Rose is thriving too.  She’s going to Kindy three days a week now and she absolutely loves it.  I love it too because for the first time in over 4 years I have some child free days to work on my blog, and try to pursue whatever it is that I want to do (it’s a work in progress at the moment).  My littlest also has the ENTIRE family very tightly wrapped around her little finger.  She says ‘jump’ and we all say ‘how high’.  I’m sure it’s going to come back and bite me in the butt soon, but we just let her rule the roost at the moment.  Anything for an easy life.

Life on the beaches gives my kids the most idyllic childhood.  I do hope they realise just how lucky they are.  I spent part of my childhood on the beach too and when we moved to England (which I loved) I still always dreamed that one day when I had my own kids they would grow on the beach too.  I still have to pinch myself that Mr D and I have actually made it happen.  It’s exactly 4 years this month since we packed up our lives in England and moved to Sydney, and I still think it was the best move we ever made (even if I do have to budget).  We’re able to apply for our Australian Citizenship later this year too – YIKES!

Our little kittens have settled in well too.  It only took them about a month to venture out from under our sofa.  Although they are very affectionate these days (and very tolerant of being man-handled) they are still a pair of scary cats and refuse to go outside.  It’s probably not a bad thing though, as there have been several diamond pythons around in the last couple of weeks and our babies are about the perfect size for a python dinner!

My sister is getting married in just over three weeks now in South Africa and we are officially on holiday count down.  We’ll be flying to Cape Town for the wedding and spending a week there with my family. We’re then heading off to spend some time with Mr D’s family too.  My kids have 5 cousins to get to know and they are super excited.  It’s going to be a big trip for us and we’re planing on packing in as much African tourism, big five animal sighting, wine tasting, general relaxing and fun as possible.  I’ve heard that the internet in South Africa can be a little temperamental, and there is this thing called ‘load shedding’ where the power just gets randomly turned of, so I’m not sure how much blogging I’ll be doing while we’re away.  I’m going to try and write as and when I can though.  I will, however, be in Canon heaven – I can’t wait to get my camera out to practice shooting on manual again.

That’s about it from me today, but before I head off to prepare dinner and then the school pick up and general crazy afternoon shenanigans, I thought I’d share this video.  She is such a little character.  If only you could bottle age 2-3, I’d have one for all of mine.

I hope you’re having an awesome day.  Tell me about it….

28 comments on “A post about nothing in particular. Just a little life update”