Even deciding what to wear was a tricky task!!!  I had to conquer two outfits, one to wear to the Kidspot Blogging Masterclass (which was going to be full of fabulous bloggers that I have only ever read online profiles of), and the other was a cocktail dress for the party in the evening.  The last time I wore a cocktail dress was so long ago that I had to send Mr D deep into our ‘storage’ to try and find my old stash of dresses!  I didn’t even know if they were going to still fit me.

I decided to wear something warm and comfy, and packed my posh frock before headed out the door.  The kids were a bit confused as it’s normally Mr D going off to work, not me!  “Where’s mummy going?  When is she coming back?” I could hear them ask as I made a dash out the front door.

It was one of those beautiful, crisp winter days where the vast blue skies can’t help but make you smile, and I had a whole heap of butterflies in my tummy to join in too.  As I pulled my wheelie bag along the road toward the bus stop I suddenly felt transported back in time to the days when I used to be dressed in my glamourous Virgin Atlantic ‘whites’, pulling my bag along to meet the crew bus ready for my next adventure.  I had that very same nervous excitement that I used to get in my early flying days when I was about to meet a brand new crew and head off into the skies!

I arrived at the venue early (I had given myself LOADS of time to find it as I’m an expert at getting lost, especially in the city).  I got out the cab, stood in front of the building and took a HUGE deep breath.  ‘Here we go” I though, as I headed through the doors (with only slightly trembling hands). 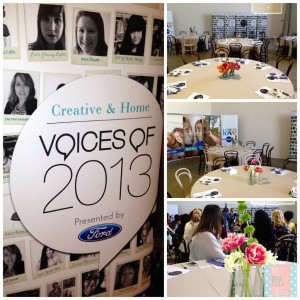 It’s really quite nerve wracking standing in a room full of people who you don’t know in person and trying to think of something intelligent to say to start a conversation – especially when you know they are all amazing bloggers!  Silly really when I used to work with some very well known A-list celebs at Virgin without even blinking an eyelid.  But for some reason I felt so much more nervous this time!!

I spied Naomi from Not just a mummy ,who’d I’d met once before, and her big beaming smile made me relax instantly.  We found a table and I sat down next to Rachel from Redcliffe Style  (“OMG OMG, just act normal” I though, with my heart beating at 100 beats a minute).  I wanted to tell her just how fabulous I think her blog is, but shyness took over and besides, I didn’t want her to think I was some kind of nutty stalker lady!!  So we chatted about our girls instead and she was just so lovely.  Also at our table was Barbs from Patchwork Cactus, Salz from Dummyspit and Karen from Yellow Dandy Dreams.  All of whom were equally as lovely and I couldn’t help feeling a little overwhelmed by all the talent in the room (in a good way of course and I had to pinch myself once or twice, just to make sure I WAS actually there). 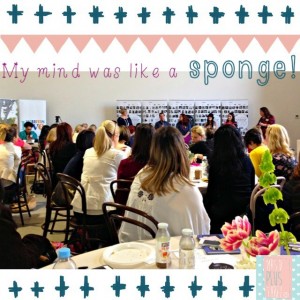 Hailey Bartholomew (award winning photographer, film maker and founder of the 365 Grateful project – amongst other things) opened the masterclass with a very emotional story about where it all began for her.  She showed us a little film called ‘White picket fenced-in” that she made before she even owned a video camera, and by the end of it I could feel the tears falling down my cheeks.  Not that it was a sad film at all……..it just really really struck a cord in me.  It was about how she felt, as a stay at home mum, that the world was just passing her by!  She managed to beautifully articulate exactly how I sometimes feel ever since becoming “mummy’ full time just over two years ago.  I’m not at all an unhappy person, in fact, I think I am the happiest I’ve ever been.   I love my three children dearly, but somethings I really do feel that there is something else out there – just for me, and if I’m not careful it’s going to just pass me by.  Hailey, you have no idea how powerful your talk was for me, so for that I thank you for the bottom of my heart.

I don’t know where blogging is going to take me, but right now, I love it!  And that is enough for me to keep going. 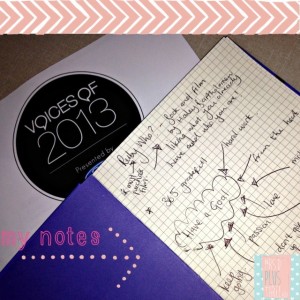 Hailey was followed by two other panels of speakers who performed a kind of question and answer type interview on everything you might like to know about blogging, from design, to social media and even to working with brands.  To me, who is a self taught, very new blogger (with next to no experience) the value of these tips and advice were immeasurable!  I was literally like a sponge, soaking it all up and furiously taking notes so not to miss anything!

These are just a few of the tips that I’ll be working on: 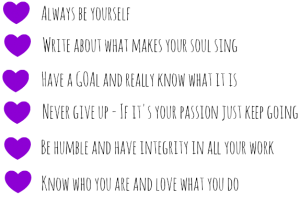 Later than evening, after the Masterclass, was a cocktail party to celebrate all those fantastic bloggers that were chosen as the Top 25 Australian bloggers in their category in the Kidspot Voices of 2013 competition.  (You can find out more about the competition here).  I didn’t make the top 25 but I was a nominee and so was invited to attend the evening.  And what an honour that was – I still can’t believe that I was even nominated!!

There was a few hours between the Masterclass ending and the cocktail party starting, but not enough time for me to get all the way home, changed and then back into the city again.  I wasn’t quite sure what to do, so I put a note out on twitter a few days before (yes, twitter!!!! I didn’t even know what twitter was six months ago) asking if there was anyone that could help.  The lovely Amanda from A cooker and A looker replied saying that I could share her hotel room.  Amazing!!  She didn’t even know who I was!!  Mr D wasn’t convinced by this ‘twitter’ thing!  “How do you even know she’s a woman?” he asked  “Anyone could be offering you a room – sounds dodgy to me!!!”  Luckily I met Amanda at the Masterclass first so I knew she was the real deal, but I still had to txt Mr D ALL the details of where I was!!

It’s truly amazing how friendly and welcoming this online community of ‘bloggers’ are.

After a fun and exciting evening of chatting to lots of like minded and fabulous woman, I headed home with a smile on my face and a fire my belly!!!  And to top it all off, I got a lift home from the fabulous Seana Smith.  Her book “Sydney for under 5’s” was literally my bible in our first few months here in Sydney!!!

So if you haven’t already done so, I highly recommend you check out all the wonderful blogs I’ve mentioned in this post, and I’d like to especially wish Amanda from “A cooker and a looker’ and Aleney from ‘Boy Eats World’ the very best of luck in the competition.

Thank you SO much to Kidspot for this amazing opportunity and for opening my eyes to a whole new world.

27 comments on “It’s ok to be a little nervous! A Master class in blogging and a cocktail party”