Personal
When I first said I’d do The Big Swim with just one week to prepare,  I knew it would be a challenge!  The last time I did a big ocean swim was when I was 16 years old (a loooong time ago).

I realise that I may have come across as ‘foolish’ to some of my readers for wanting to do it with such little preparation.   However, I really want to reiterate here that I do have a very healthy respect for the Ocean and to those amazing lifeguards who work so hard to keep up all safe, and I honestly would not have put myself in a situation that I did not believe deep down I could do!!

With that in mind, I was still nervous and a little scared – but’s what’s a challenge if you aren’t a little nervous or scared right???  For me it was all about pushing my boundaries and I really am a great believer that boundaries are there to be pushed and that box is there to be thought outside of (if you know what I mean).  There is also nothing wrong with trying…….. (You can read my previous post about preparing (or not) for the Big Swim here)

As a fairly strong swimmer I just thought my biggest problem would be exhaustion (from lack of training), but I wasnt worried about that – with mind over matter I knew I could push through it.   I tried really hard not too think about anything else (sharks, big waves, rips etc).  With just one week to get ready there was very little I could actually do except just get in and swim!

I woke up on Sunday morning and felt like a million butterflies had been let loose in my tummy!  I didn’t even have to look out the window to see the rain as I could hear it pummelling down heavily on the roof!!  It was the worst kind of day you could possible want for an Ocean Swim and suddenly my nerves because very very real!!!
“What do you think?” I whispered to Mr D as we lay in bed listening to the down pour!  “You’re mad!” he whispered back.  (Don’t know why we were whispering but it seemed like the thing to do).  “I’ll just check twitter and see what everyone else it doing” I said, pulling out my phone.  (Get me……. 6 months ago twitter was as foreign as trekking in the Amazon jungle to me).  Some people on twitter were pulling out due to the weather and some were still keen to try!  Well that was no help to me!!  Especially as neither Mr D or I were very good at reading into the effects of wind direction and swell size.  I just wanted someone to tell me what to do!
No such luck, so I decided that I couldn’t not try!  I had to at least give it a go.  So we piled the kids into the car and headed to Palm Beach.

Mr D dropped me at the Beach while he went off to find somewhere to park.  The rain was really starting to come down and there were lots of people just standing, staring at the surf.  I felt a bit like a little lost kitten, just wondering around not knowing what I was doing.  Everyone else seemed to be there with someone or in a team of some sort.  I wondered what was going through their minds?????  Were they nervous or excited??  I realised then that my biggest fear was actually the unknown.

I stood and stared at the waves for a few minutes like everyone else and tried to appear like I knew what I was looking at.  They just looked BIG to me!  How was I going to get passed that break to even begin the swim??  I decided that I needed to make a friend – someone who looked like they knew about waves.  I wondered over to a guy that was pointing out towards the waves.  “He’ll do” I thought.  “Hi, I said “Are you swimming today?”.  “Yes and it doesn’t look like fun out there”, he replied.  (Gulp!!) “Me too” I said, “it’s my first time – any tips?”  “Swim wide and hope for the best” he said!  Mmmmmmm maybe at this point I should just enjoy my ignorance – like they say, it is supposed to be bliss!
I still had half an hour before my start so I went over to register and find out what to do. 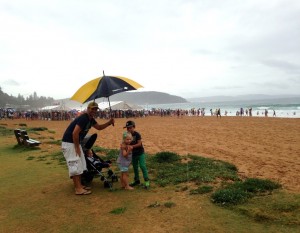 I found Mr D and he looked as pale faced as me.  “Don’t worry” I said, “I’ll be ok.  The worst that will happen is that I’ll get pulled out by one of those lifeguards on the jet ski’s”  (I felt a little touched that he was that worried about me).  “It’s not you!” he said “the kids are doing my head in already!!”  Ha! well, if I couldn’t find it before, there was my motivation!!!   An hour or so of swimming with just my own thoughts or an hour or so in the rain with three whingy children??

Guess what I chose??
“Good luck mummy” I heard the kids shout as I made my way to the start line.  This was it – I was getting in! 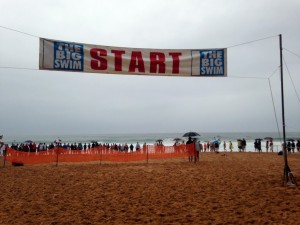 As I nervously waited at the start for the gun to go off, I recognised some of the Can Too swimmers in their unmissable black and orange swim suits.  They were all pretty nervous too and discussing tactics on how to get out past the break.  I kind of gate-crashed their conversation for a bit of support and they were all so incredibly nice to me that I suddenly didn’t feel so alone.  What a lovely bunch of girls and if any of you are reading this – thank you so much for your support. 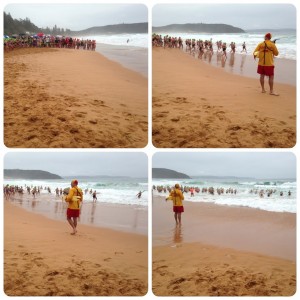 I managed to get out over the break without too many problems, although it was pretty exhausting as I had to really hold my breath to get under every huge wave that crashed over me.  I could feel their power rush over my body and try to pull me backwards with it.  I just kept going until I suddenly realised I was no longer fighting the current!  WOOO HOOO I made it!!  I was so happy, I could feel the grin spread across my face.  The power of positive thinking.

The rest of the swim was almost exhilarating.  The water was a beautiful temperature and as I relaxed I really started to enjoy it.  I freaked out a couple of times as I swam through a shoal of little fish and at one moment my hand grabbed hold of a jelly fish and I almost lept out the sea in fright (and then chuckled to myself when I thought how funny I must have looked).   I had to look up quite a few times just to check I was going in the right direction, but otherwise I sang a few songs (fortunately no one could hear me), did my meal plans for the week and made a list of things I still had to get for Master J’s first day of school later that week!!  Before I knew it I could see the last buoy and I knew I was nearly there.

I stopped and paddle for a bit, just to see what the waves coming onto shore looked like, but I couldn’t really tell from where I was.  Everyone else around me just kept swimming towards shore, so I put my head down and kept going.  Then suddenly, out of nowhere my whole body felt like it was being tossed around in a washing machine.  I didn’t even have a chance to gather my thoughts or work out where I was before I was smashed again and rolled in every direction.  Gasping for air, I popped up only to be faced head on with another huge wall of blue with angry white horses galloping at speed along the top! SMASH and under I went again.  My goggles were ripped off my head and as I came up there was a quiet lull. I looked around frantically and felt myself starting to panic.  My mind was a total blank and I could feel myself freezing in fear.  I just couldn’t think of what to do – how was I going to get to shore.  I still was still bobbing up and down, panicking, when I got hit again by another huge wave.  This time I  could feel myself being bashed into someone else (who was also caught in the wash).  I was still no closer to shore so I put my arm in the air and called a lifeguard over.  I’ve never had to do that before and it really made me realise just how easily you can get into trouble in the ocean.

Before he pulled me into the boat, he told me that I was only about 15-20m from shore and if he put me in the boat I would be disqualified!!  After all that I was NOT going to let that happen, so I gave the waves one more chance and they literally spat me on to the beach!

If fear of the unknown is what you’re really afraid of  – then just GO FOR IT!  You’ll be surprised how well you do.

6 comments on “If your biggest fear is the unknown……..then just GO FOR IT! (My Big Swim)”