One of my Goals for 2014 is to go camping.  I say my goal, but it’s actually a family goal.  (I’m pretty sure I can hear a few of my friends back in the UK sniggering at just the mention of me plus camping!!!)

I do have a teeeney bit of a reputation for being a princess, and camping is just one of those things that has NEVER been top of my priorities.  I just don’t like the idea of crawling around on my hands and knees to get in and out of a tent (which in fairness is a temporary home) and worry about what creature might decide to join me in the sleeping bag!!  The idea of a shared bathroom – or even worse, no bathroom at all, just makes me want to wrinkle my nose up like a true snob!!

When we lived in England camping was just never on the agenda, which suited me fine.  We did actually go camping once, and in the middle of summer it was so freezing cold the Miss H and I ended up abandoning Mr D and Master J (and everyone else) and booking into a B&B.  That was only a one night trip too (and one I’ll probably never live down).

However the Aussie weather just lends itself to camping and it really seems to be a popular sport (if you can call it that).  After three years I have finally been worn down enough to actually consider giving it a go.  Funnily enough Mr and D and I both camped as kids, but both our families had caravans, which is an entirely different experience if you ask me.

We have never camped as a family before.  Oh except for that one weekend a year ago we spent at a campsite so close to home that I went back to cook, wash up, shower and sleep!!!!  Not only have we made the decision to camp this year, we have also booked a whole week (over Easter) in a camp site about 7 hours drive from home!! EEEEEEEEK!!

So this is where the Great Camping Debate sets in.  We don’t actually own any camping gear at all…..not a thing!  So between now and Easter we have to purchase EVERYTHING.  It’s kinda cool starting from scratch and Mr D says it’s ‘an investment’, but we just can’t seem to agree on what things are essential for camping!!

and this is Mr D’s vision…… or something along these lines. 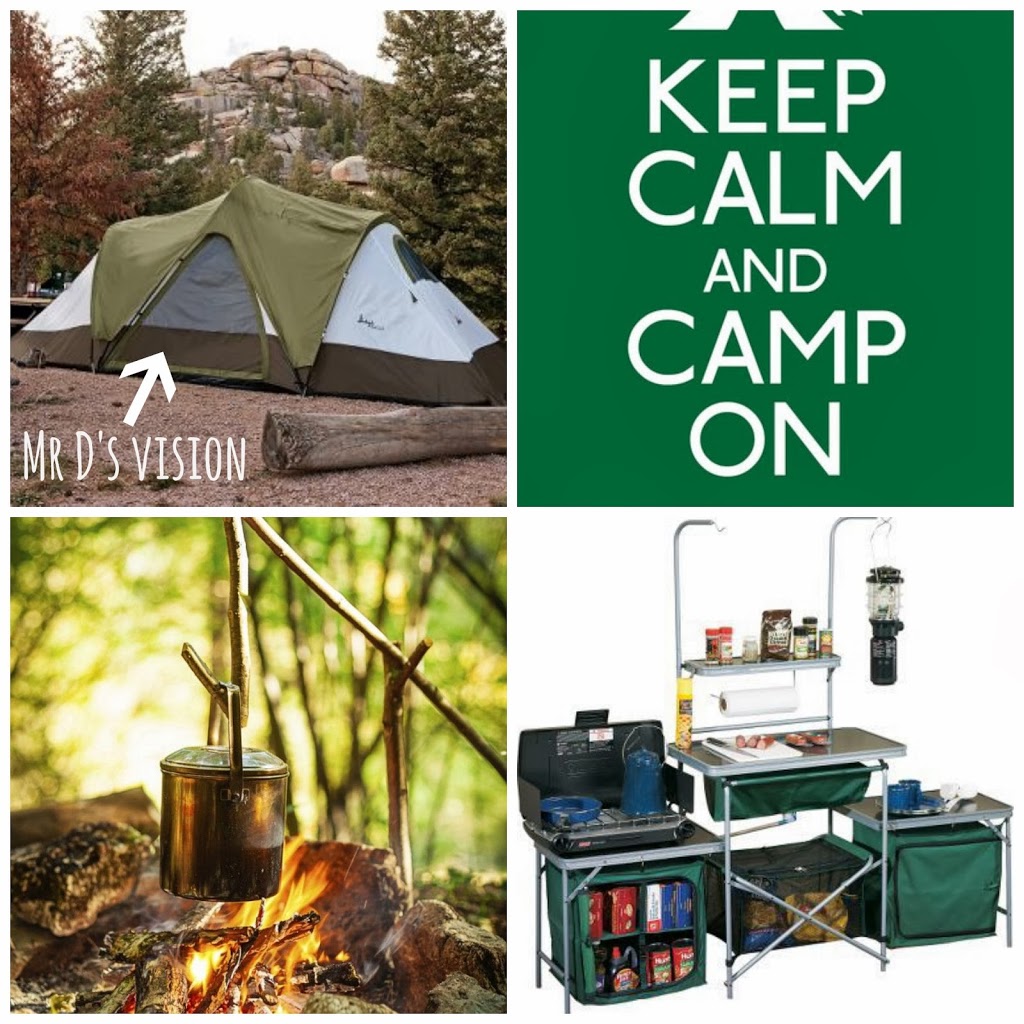 So will we be glamping or camping??  All I know for sure is that it’s happening and clearly we still have a lot to learn!!  At least we have been able to chuckle about our slight difference in camping styles.  I’ve even convinced him to get his own Pinterest account so he can have a camping board (and I can spy on it).
The one thing that I am very excited about is that I think I have almost convinced him to buy that beautiful teepee tent.  We went into a camping shop to have a look at it the other day, and even Mr D had to admit that it was pretty cool.  No decision has been made yet, so please keep your fingers crossed for me.  Who says camping shouldn’t be pretty???
The kids are beside themselves with excitement about our upcoming trip and I have to admit that I am a teeny bit too!!

So are any of you experienced campers??  Especially camping with kids??  Tell me everything you know……..

16 comments on “Camping vs Glamping”