Last weekend I took a very long-overdue trip to Melbourne to visit my cousin LCJ (who also just happens to be the only other member of my family living in Australia).  It was not only my first ever trip to Melbourne, but also the first time I have been away without the kids for over two years.  To say I was eXiTeD could have been just a tiny understatement!!!  LCJ bought me my tickets for my birthday back in January and it’s taken me until now to actually use them.  I think she was starting to doubt that I would never make it……………BEST birthday present ever!!

As I stood in the check-in queue at Sydney airport – still marvelling in the fact that I only had check-in luggage and an actual handbag (not a nappy bag, a pushchair and the kitchen sink), I overheard the check-in staff saying that the flight was delayed by 3 hours!!!!  ‘Are you kidding me???’ I thought.  However having worked on an airline for many years, I know full well that the worst possible thing you can do is take it out on the staff!  It’s very rarely their fault and having a go at them will only make  your day worse.  I waited in line patiently listening to passenger after passenger demand an explanation for the delay and get nowhere.  Hey, I only had check-in luggage – how could I possibly be in a bad mood anyway??    I eventually got to the front of the queue and my polite attitude must have worked as I ended up in a business class seat on the next flight (only half an hour later than my original flight) while everyone else waited out the delay.  It ALWAYS pays to be polite 🙂

I managed to get a bus, train, plane and another bus all without a hitch (or me getting myself into a lost state of panic) and met LCJ in the city of Melbourne, ready for a night on the town.  Well, a posh dinner and a few drinks anyway – we’re not as young as we used to be!!  I had a night time tour of the city (luckily I was wearing comfy boots) and we had the most AMAZING dinner at Red Spice Road.  It was Asian food at it’s finest and I highly recommend you try the Goat.
I really thought I would automatically wake up at some ridiculously early hour the next morning because of some cruel built-in baby clock.  However when I first leaned over and looked at my phone it was 9:55am!!!!!!!!!  I CAN NOT tell you the last time I slept in that late.  I gave Mr D a quick call to check that they were all surviving, only to discover that Master J had a head full of nits!!!  NOT AGAIN!!  I have no idea whether or not I had them too, but seeing as I had given him a cuddle before leaving for the airport there was a chance………….and one that I was not risking!!  You can take mummy away from the chaos but you can’t take the chaos away from mummy!!!  Not only that, but I developed a sudden case of ‘itchy head’ – which was more than likely psychological but I needed to find a chemist for that magic shampoo ASAP! 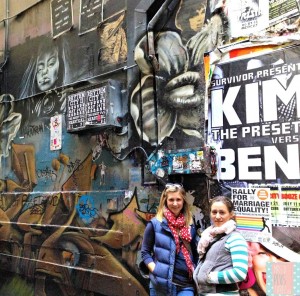 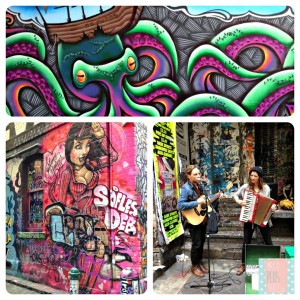 Once the hair was fixed we were able to get on with the real fun!  Firstly we went out for brunch to a place called Hardware Société.  It was apparently highly rated and LCJ hadn’t had a chance to try it yet either, so it was a must.  It was down the cutest little lane and when we arrived I could not get over the queue of people waiting patiently outside for a table!  I did feel a bit sorry for the surrounding cafe’s who obviously weren’t quite as popular.  We put our names on the wait list and went for a walk to pass the time.  Luckily it was only a 40 minute wait as the smells of freshly baked bread and bacon was wafting around every street in Melbourne – it was torture!! But the breakfast was worth it and we were all smiles again.
We spent the rest of the day walking around the city.  I haven’t been a proper tourist somewhere for so long that I really enjoyed stopping and taking photos of everything.  Melbourne has a totally different atmosphere to Sydney.  It’s not quite as pretty as Sydney (sorry Melbourne people) but it definitely has a much more relaxed and chilled out vibe too it.  It is also really cultural and I loved all the different sections.  There was the Parisian/European part with the beautiful old buildings and the river cafe’s, the uber trendy streets with the coolest graffiti art I’ve ever seen.  The busy shopping district with the trams running through it and of course the really sporty section, which had these hugely impressive stadiums as far as the eye can see.  The whole city was full of lots of tiny little, almost secret lanes, with so many cute and trendy cafes, bars and shops that only people in the ‘know’ would be able to find.  I loved that!!
LCJ doesn’t have any kids (yet) but she does have two of the most adorable little dogs who were desperate to go out for a walk when we got home that afternoon.  Even though the clouds were threatening rain we decided to take them to the beach.  Thank heavens we took jackets as the wind was FREEZING!!!!
Apparently Melbourne is not rated for it’s city beaches but I thought they were gorgeous!!  They are obviously not the same as the turquoise waters and white sands of other parts of the country – but for me, the ocean is the ocean!!  No matter where I am, it has the same mystical calming effect on me.  I think I might have been a mermaid in a former life.
That night we got dressed up and hit the town again.  Well actually we started off at a house party to watch the Lions Final (which I won’t say too much about as it’s probably a bit of a controversial topic for me being a Brit living in Aus).  It was a highly amusing, slightly drunken and VERY funny night!!  It deserves a blog all of it’s own – so watch this space. 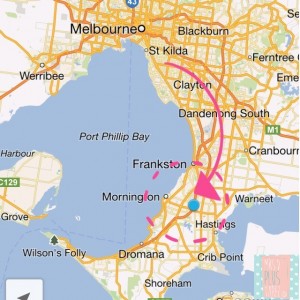 The next morning, with rather large hangovers in tow, we decided to drive to the Mornington Peninsular to do a spot of wine tasting!!  Hair of the dog and all that.  Luckily LCJ’s very patient boyfriend offered to be our chauffeur. 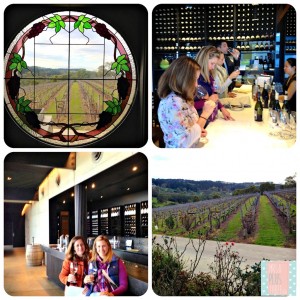 We stopped for lunch at the Paringa Estate and had the most delicious and uber posh food.  (One of those kinds of meals that have to enjoyed without children in tow).  We of course HAD to taste all the wines too, which was a bit tricky with that hangover still insisting on staying with us – but we soldiered on, much to our chauffer’s amusement!!  He was placing bets on which wine we would like the most and was convinced it would be the most expensive!! He was right :))

We drove around the area and (and tasted a few more wines) before heading back home for a movie and an early night.  The whole area was just breathtakingly beautiful with views to die for.  I would love to go back with Mr and D and the kids to spend some time on the gorgeous, almost Mediterranean like, Mornington Peninsular Bay.

I arrived home on Monday morning feeling relaxed and happy, to three little faces who had genuinely missed me.
Thanks Mr D for doing such a great job holding the fort while I was away and an especially huge thanks to LCJ and MT for such a fabulous weekend.  I love you all