I decided that the best way to figure out which suburb to live in is to ask Emily (my new friend the sat nav) to take us to each one every day so that we can try before we buy!!  So far each one has been lovely, but last night when looking through the endless lists of rental properties on the internet I came across a house that I instantly fell in love with!  It’s in a town called Collaroy, about 40 minutes north of Sydney centre (and not too bad a commute for Mr D – can’t have him moaning every morning!).

So this morning we head to Collaroy and already I have decided that I love it (based solely on the perfect house of course).  Emily wants to know an address and is not happy with just “Collaroy”, so I keep tying until predictor txt comes up with Parks street – Perfect we’ll go there!!

As we approach Collaroy I see a little road covered in bushes, that looks like it heads to the beach, on the other side of the dual carriage, so I do a quick U-turn (which I’ve discovered is perfectly ok here!! Awesome as it’s got me out of a few tricky situations) and see where that little road takes us.  We arrived at what I can only describe as ‘surfers paradise’.  For those of you who are South African, it reminded me of the north coast of Natal – Zinkwasi beach as it was when we were kids!

The weather was now sweltering (a delightful 29 degrees) and the kids were desperate to get out the car and get wet (any water will do – including the rain puddles as you previously saw).  We climbed up the ‘secret path’ as Josh called it (which was actually a sand dune) and once we reached the top the views were breathtaking.  I had to just stand and take it in for a couple of minutes before realising that my kids were almost out of sight and I had to make a mad dash to the bottom of the dune.


After running across this mass expanse of golden sand that went as far as the eye could see until it reached the sky, we finally settled on the edge of the lagoon which was running into the sea.    I covered the kids in almost a whole bottle of sun lotion and sent them off to play.  I really must look into banana boat shares if this is any indication of how much of the stuff I will be getting though.
I’d love to say I settled down on the sand and relaxed for a few hours, but instead I spent the next hour or so rushing into the current to collects shoes, lunch boxes and any other random item that Miss H threw into the river to watch it float away.  The current was deceivingly strong and almost took me off my feet a few times (much to Josh’s amusement).  I decided it would be far more sensible if we moved to the still waters of the lagoon (very responsible parental decision).  Aaaaah at last I could relax and just listen to the joyous sounds of the kids screaming and giggling whist feeling the sun beating down on me. 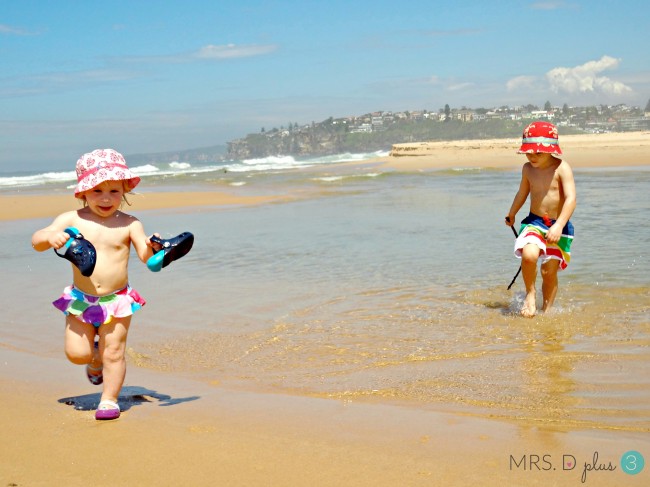 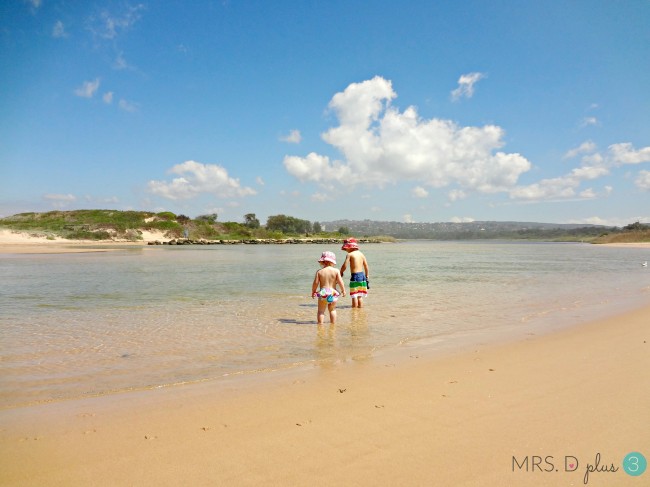 Right, time to move on.  We are on a very serious ‘area to live’ search.  I have to report back more to Mr D with more than just ‘it has an amazing beach!!!”.  We start the long treck across the sand back to the car.  The kids are exhausted and the temperature is now brutal – and of course – Miss H wants ‘a carry’ and Master J has ‘sore feet’.  I lug Miss H on to my hip and negotiate a deal with Master J for about 5 minutes until he realises that we’re almost at the car and he can now run!!  Just as we reach the car, I notice that Master J is not wearing his shoes (essential beach wear as the sand is hot hot hot).  ‘Where are your shoes? I ask.  ‘On the beach’ he replies!  Silence……….as I contemplate – do we all trapse back to the lagoon to fetch them (in this heat)??  Do I just abandon them and buy a new pair?? or do I leave the kids in the car and make a run for them???  What to do what to do what to do????

I forgot to mention that earlier, when we had arrived, there was a little beach shack/ice-cream shop in the car park.  The minute the kids saw it they wanted ice cream – so I agreed (as they had been stuck in the car for a while).  The shop keeper was a little strange.   We eyed each other up for a second as I looked at the menu.  I couldn’t work out if he was totally high or just a bit odd.  He had longish hair and had a rather vacant look on his face.  He was also wearing nothing but a pair of underpants!!!  Some might call them speedo’s but where I come from, if they’re cotton, they’re underpants!!  He didn’t seem to think anything of it though as he strolled around – and neither did any of the surfers that were in the vicinity.  I asked him for 2 ice-lollies and he smiled and then jumped into a great long conversation with me.  I realised that I may have mis judged him and  he was actually just a really friendly local (although still a bit odd) and I discovered his name was Frank! He reminded me a little of that character that was friends with Hugh Grant in the film Notting Hill. 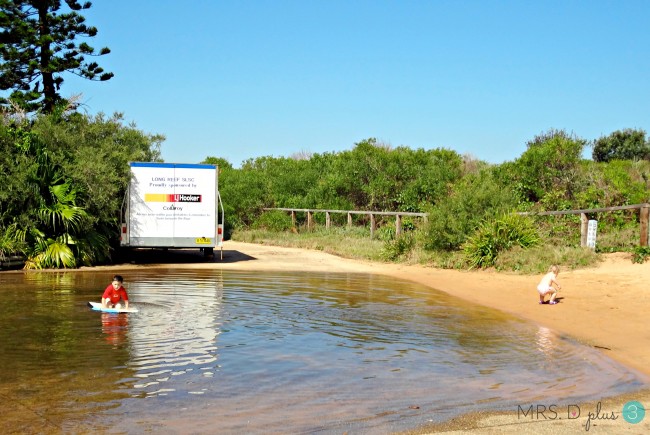 Anyway, back to my dilema with the beach shoes!  I decided that I couldn’t replace them – Mr D would not be impressed with that financial decision as I’d just paid a whopping $50 for them (besides I don’t yet have a bank account).  There was absolutely NO way I was going to carry Miss H again and negotiate with a tired and whingy Master J ALL the way down the beach back to the lagoon again in this heat.  So my only option was to leave them in the car!  Was I mad???  Would I ever do this at home???  No Way!!  But I put them both in the their car seats, put the windows down and turned on the ignition (I had to – no air-con and I would have come back to two pools of melted children).  I gave Master J a lecture about how he was not to touch any buttons WHAT SO EVER(again visions of returning to see the car halfway through the ice cream shop) and if anyone opened the door he was to SCREAM as loud as he could!

I took a deep breath and ran – up the sand dune, down the sand dune and across the wide expanse of beach- and at last I found the shoes!  I grabbed them and started to run back.  I was almost dying by this point, running on the sand in the heat is no easy task but I had to get back!!  Again, thoughts of “was I crazy’ were flying around my head!! (also a couple of ” I had better loose a few calories for this” floated in too).  I finally got over the dune and saw the car was still there.  As I got to it, panting, hardly able to speak, pouring with sweat and red faced, Frank gave a little wave and said “Chill English – I had my eye on them!!”

Would you leave your kids unattended in the car?

1 comment on “Would you leave your kids unattended in the car?”