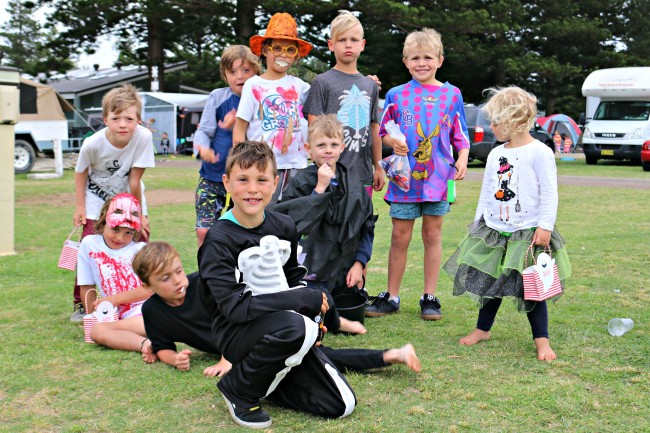 Last week my gorgeous boy finally turned 9.  I swear he’s been counting down the days since the day after he turned 8.  He’s also been asking for a camping party since last year too.  Mr D and I were not keen on the idea but he eventually wore us down.  We agreed that this year he could invite one or two friends and we’d go camping.  Before I could blink, one or two friends had turned into 10 boys! He just couldn’t decided on who he wanted most, and me, being a total pushover, let him have ALL his friends.

Mr D and the kids (just ours at this stage) set up camp on Friday night, while I went home to mentally prepare.  It was going to Halloween AND a full moon on Saturday night, and with 10 boys to look after, I just had to hope they weren’t all going to turn into werewolves. 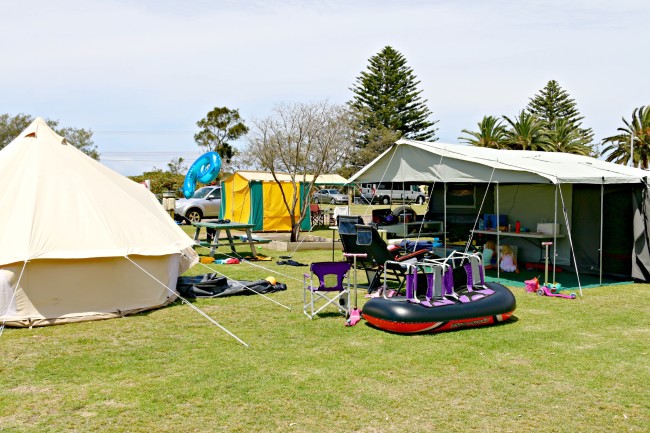 Once they arrived, it took about half an hour for them to warm up, and then there was no stopping them.  They all disappeared into the caravan park in every direction,  along with hundreds of other children camping that weekend.  I suddenly had a massive panic that I was never going to keeps tabs on them all.  What had we got ourselves into??  After about an hour of running around after them trying to count heads (and losing them as fast as I found them) I gave up and went back to camp, poured myself a wine and plonked on a camp chair.

Mr D didn’t wasn’t bothered at all that we seemed to have no idea where they all were, so I thought I might as well join him in blissful ignorance.  Fortunately his instincts were right and they all found their way back to camp in one piece.  Once they were all gathered up (which was like rounding up chickens or cats I might add) we set a few ground rules:

That seemed to do the trick and from then on it was plain sailing.  They spent the next couple of hours in the lagoon on a bunch of cheap blow up boats, having the best time ever.  I sat on the bridge (up high so I could see them all) and watched them play.  What an awesome childhood these kids have. 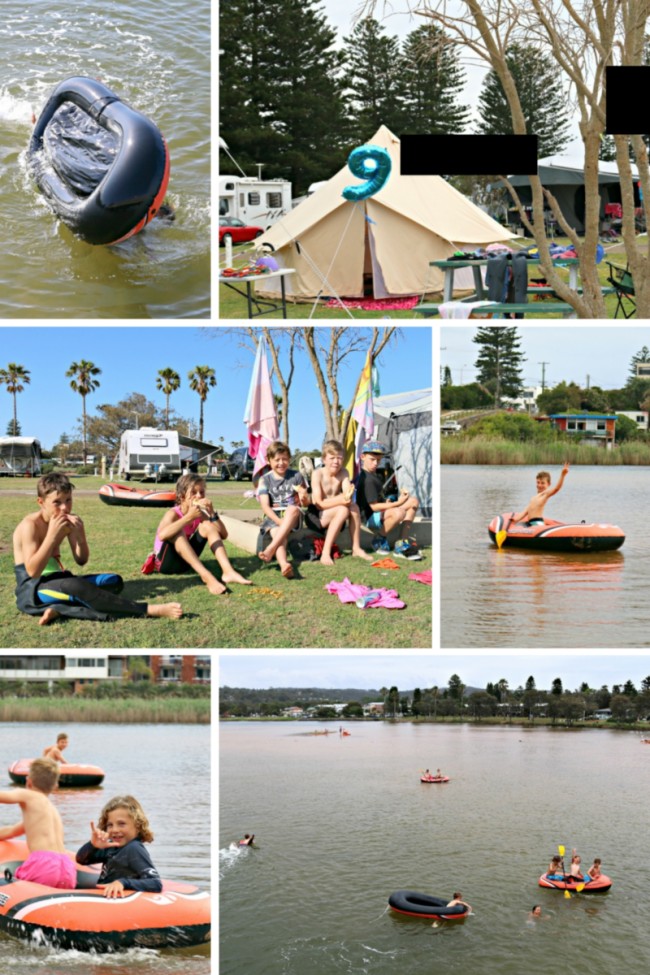 Later that afternoon, they all piled into the toilet block for hot showers before getting themselves dressed up for Halloween.  I had every intention of making sure they all ate at least a hot dog before they set off trick or treating, but there was just no way!  They were gone before I could even offer!!  Oh well, back my plastic glass of wine then.  I have no idea how many lollies they ate, but I’m pretty sure it was A LOT.  They were so full of sugar, they didn’t even have space for birthday cake! 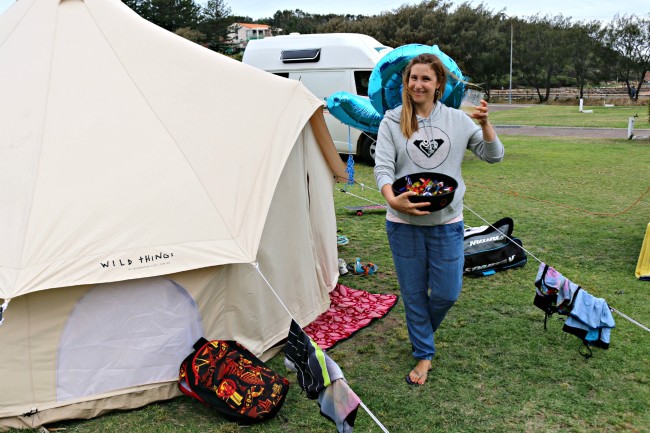 I had to chuckle at the stories that came back to camp.  They thought they were so cool, being able to go off trick or treating on their own (it was perfectly safe within the caravan park before you worry about my parenting skills).  The stories that came back were pretty amusing.  “We got chased by a werewolf on a bike”, “We climbed up a tree and pretended to be a vampire to scare this lady”, “We dropped plastic teeth in someone’s beer”………. The funniest thing of all was how they all knew exactly who’s stash of lollies was who’s, even though they all had the exact same bucket to collect them in.

At about 9pm Mr D and I high fived each other as we said goodnight to the boys.  We had managed to get all 10 of them to put their pj’s on, brush their teeth and get into their sleeping bags without any tears or broken bones.  Little did we know this was only just the beginning. I thought they’d be shattered but the giggling, dancing and ‘who knows what else’ went on in that tent until about half past midnight. There were a few nudie runs around the tent too, that I might or might not have witnessed!  According to the boys they pulled an ‘all nighter’.

At 6am the next morning I was woken up with “Robyn, do you know where my sock is?”  I have no idea who was who or what belonged to who when I opened up that tent the next morning.  It looked like a tornado had swept through it during the night.  They didn’t seem to care though and were back swimming in the lake before 7am.

I don’t know about anyone else’s kids, but by the end of the weekend mine were absolutely exhausted.  Like I’ve never seen before tired. 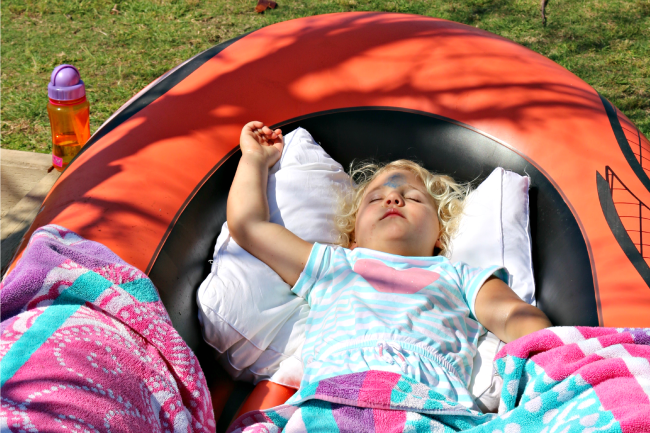 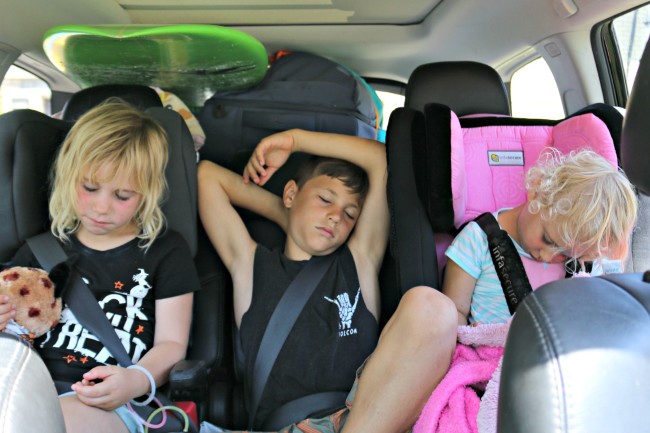 That has got to be the sign of a good party, surely?  Well, that, and the part that we managed to look after all those kids without any trips to the hospital, losing any or any dramas.

Have you ever looked after that many kids in one go before?

Do you wish you could be as carefree as a 9 year old kid again?

15 comments on “What happens at camp, stays at camp”