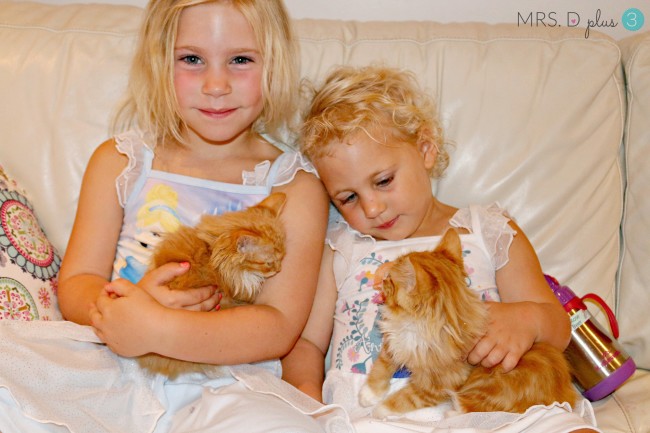 It seems I may have got two new babies while Mr D has been away on a business trip………Ooops!!

So it’s an interesting story really.

I’ve desperately wanted a kitten for ages and now that we’re nice and settled I though it was the perfect time.  However Mr D wasn’t so keen, and our landlord said ‘no pets’.  On closer inspection I realised he actually said ‘no dogs’, so I thought I’d just run the cat thing by him ……..if you don’t ask, you don’t get.  I waited until Mr D jetted off to Texas and then made my move.  To my absolute delight (and surprise) he said YES and one yes is as good as two right??. 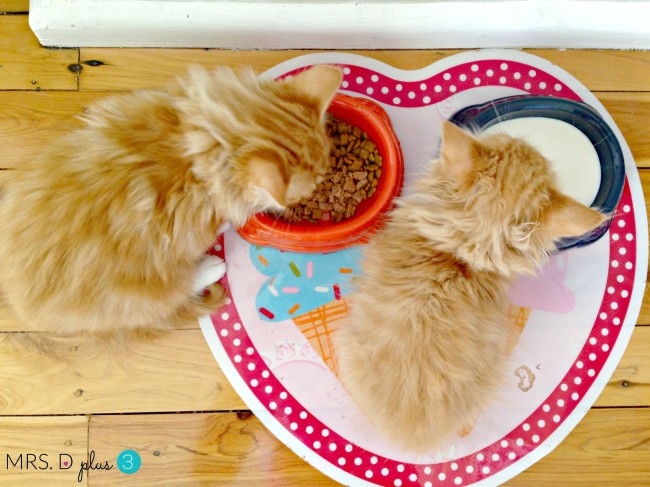 I was just about to start my ‘cat research’ when I saw an ad on a local facebook page from a lady who said that her cleaner had some kittens that desperately needed re-homing.  It HAD to be a sign!!

I called her up and she gave me her cleaner’s phone number.  I dialled it straight away and in her broken english she told me that she had found the kittens, there was no mamma cat and if she couldn’t find ‘good people’ she was going to have to drown them.  “No No NO” I told her, I’m coming to get one!!!!!!”  I don’t think I could get away with more than one and she assured me she had some other people coming.

It was almost 3pm by now, so I dashed to the school, picked up the kids and headed off to rescue a kitten. 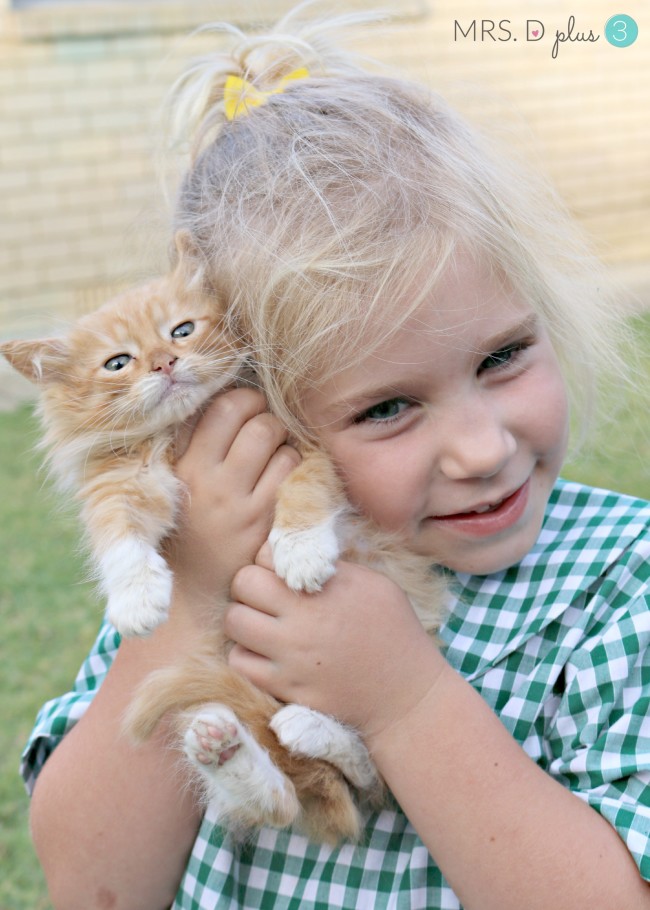 We had to drive about an hour to get to her house and on the way I started panicking “What am I doing??  I have no idea where I’m going and I could end up with my head in a suitcase and my organs on ebay!!”  But those poor babies………..I couldn’t let them be drowned!!  The kids were so excited by now anyway, and surely that nice local lady wouldn’t have put me onto a lunatic!!

We arrived and I locked the kids in the car and knocked on the front door.  A Chinese lady appeared with a box and handed it to me.  “You good person” she told me “You look after cats”.  “CATS??” “I thought I was just having one??” I said, looking inside the box.  “No, you have two.  PLEASE you good person!”  I peered inside the box and these four terrified eyes stared back up at me.  How could I leave one behind??

I got back in the car and said to the kids “Your Dad is going to kill me when he gets home!!”  “Don’t worry Mummy” says Miss H, ‘We won’t let him.” 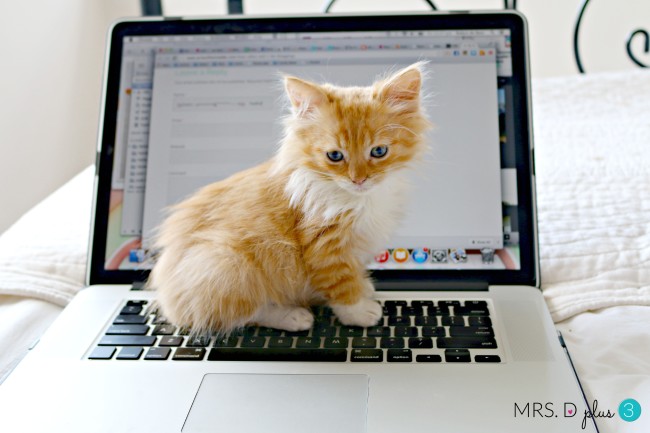 They’ve been with us for five days now and the kids have named them Albert and Stripes.  I took them to the vet and discovered that we have two little boys who are roughly about 7 or 8 weeks old.  The vet gave them the once over, wormed them, de-flead them, vaccinated and mico-chipped them.  There is no going back now.  I also gave them a bath as they were a bit smelly when we got them.  Now they are nice and fluffy and smell like flowers.

The only teeny tiny problem was that Mr D still had no idea.  I knew exactly what he’d say though, so I had my argument prepared.

Me:  Well actually he said no dogs.  I asked him about a cat and he said yes! (bats eyelids a little)

Mr D:  Who’s going to look after them when we’re away?

Me:  I already spoke to the neighbour and she said she would be more than happy to come and feed them. (Cheshire cat grin)

Mr D:  What if they catch a mouse or a frog or a bird??  Are you going to call me home from work to deal with it???

Me:  Mmmmmm no.  Master J is really good at that kind of thing.  He says he’ll get rid of them.  Besides they also catch spiders and lizards which is very useful don’t you think?? (more eye batting)

Me:  Don’t worry it’s all coming out of my budget.  I have it sorted, you won’t even notice. 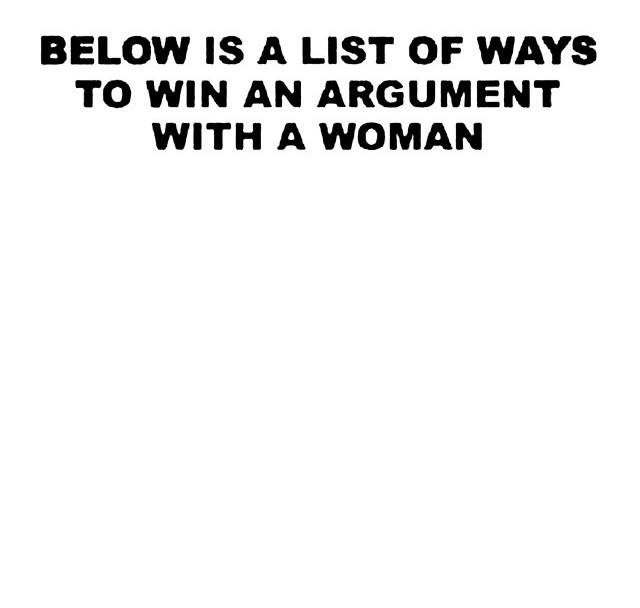 I sent him the cutest little photo this morning (7 days since he left) as I knew he was missing us so couldn’t possibly get mad. 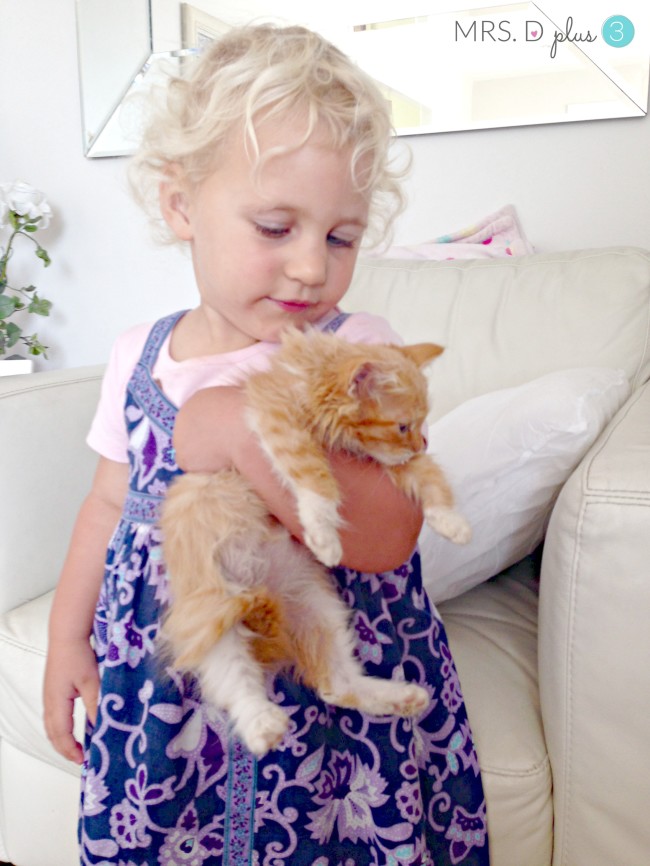 Hurry home and see our new babies Mr D.  We are all smitten.

Do you have kittens?? Any advice on the best ways to look after them?

38 comments on “We have two new editions to the family”