I am forever on a mission to try and reduce our grocery bill.  I used to be a bit of carefree, just chuck it in the trolley, kind of shopper.  I’ll also admit to being a bit of a grocery shopping snob too, and used to do most of my shopping in Waitrose when we lived in the UK. (I’m not sure of the Aussie equivalent – or if there is one!!).

Now days if I’m not careful the weekly bill can just spiral out of control before I can even blink – especially with a growing family of five.  Since having my thermomix, the way I shop has changed almost completely too.  I am now making so many more things myself – meaning I buy a lot more ‘raw ingredients’ than ready made foods.  It’s had a fantastic effect on the our overall health and on the budget AND I am actually enjoying cooking for the first time in my life.

Some things, however, you just can’t change…….those being the monthly essentials including toilet paper, washing power (lots of it), toothpaste, dishwater tabs, nappy san……..and so on!!  You know, all the boring yet expensive stuff that we just can’t get away from!

I have recently been converted to Aldi too – and being a self confessed grocery snob I really wasn’t sure about shopping there.  But I promised Mr D that if he bought me my thermomix I would reduce our weekly shopping bill, so I had no choice but venture in!!!!  And I was so pleasantly surprised.  All thier products are significantly cheaper than most other supermarkets (and although they have funny names) they have proven to be just as good!  In fact I recently read an article in a British Newspaper that stated that Aldi was listed as the second best supermarket behind Waitrose in the UK for 2012 – ahead of Tesco and Marks and Spencer!!  So there you have it – you can never judge a supermarket by its cover!!

Anyway, back to Costco!!  I have heard SO many people tell me that if you want to save money on the boring essentials (that I mentioned above) then Costco is the place to go.  Although you have to buy everything in bulk, so you need to have storage space if you are going to make the trip.  Last Saturday it was pouring with rain, so Mr D and I decided to make the trip to Costco and see what all the fuss was about.  It took us nearly two hours to get there (as Mr D insisted he knew where he was going………..and who was I to argue!! – Apparently it was the Sat Nav’s fault!)

We eventually made it and the queue to register was ENORMOUS!!!!!!  In fact there were so many people around that I have one word to describe my first impression “pandaemonium”!!  As it had taken us so long to get there there was NO way we were turning around and going back, so we stood in line and eventually became fully fledged Costco members.  It costs $60 a year to join and you can only purchase things if you are a member.  Luckily Mr D had remembered to bring some ID and proof of our address for us to register (something which hadn’t even occurred to me).  I don’t even want to imagine the stress if we’d got to the front of the queue and not been allowed to join.

Once we finally got in there is was fantastic!  And everything was SUPER-SIZED !  I can imagine it could be very easy to get carried away in there – no wonder the trollies are so huge!  We were very good and just stuck to our list, although it had been such a mammouth task to get to this stage and there were just SO many people in there that Mr D insisted we get double of everything.  “I’m NOT coming back here for at least another year!” he said.

So my conclusions are: 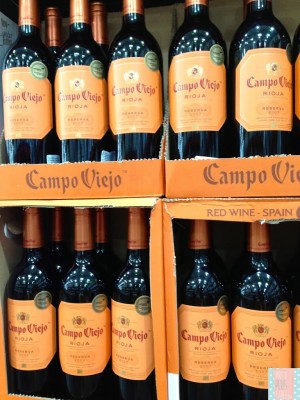 Have you been to Costco yet?  What are your tips to keeping your grocery budget in check??

7 comments on “My first trip to Costco”