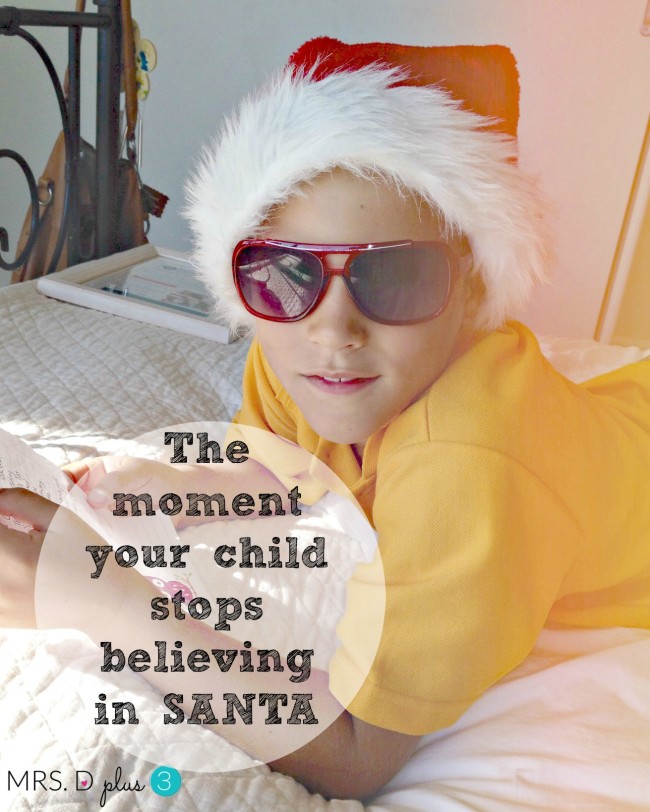 It never even occurred to me the realisation that Santa isn’t real might actually be quite devastating to a child.  Until this morning that is, when a huge force of the mummy guilts knocked the wind out of me!

Normally cool as a cucumber and always the dude, I often forget that Master J (who turned 8 in October) can be quite sensitive at times.

We’ve been butting heads a bit recently as the Christmas festivities have swung into action. His lack of enthusiasm to take part in anything has been frustrating me no end.  The girls are bouncing off the walls with excitement and his half hearted effort to even look excited has been all too obvious.  His blatant refusal to write his Christmas wish list for Santa (which he’s done every other year) should have been a clear sign to me that something was up.   However, I’ve been so fed up with his cranky behaviour and terrified that he’d say something to undo the girls enthusiasm (out of spite) that it didn’t even occur to me that something might be wrong.

Yesterday a quick trip to the shops after school turned into an epic nightmare!  Firstly we lost Miss L, along with ten years of my life, but thats a whole other story.  Secondly I had to endure a good half hour of weeping and wailing from Master J because I wouldn’t buy him what he wanted.   “PLEEEEAAAASE mum” He begged.  “No! it’s less than 3 weeks until Christmas, put it on your Santa list” I told him.  Cue, even bigger meltdown!!  “NO! there’s no point, he’ll never know which one I want and he’ll never bring it.” he wailed from the back of the car.  “Of course he won’t if you don’t tell him” I replied.  Even Miss H piped in to tell him that she had written and posted her letter (which really didn’t help the situation).

His behaviour in general was so revolting that I put it down to ‘end of term-isit’ and tiredness and made sure he had an early night.

He woke up this morning and was still sad, still going on about the things I had refused to buy and still refusing to write to Santa list.  My patience levels were dropping rapidly (whilst trying to get everyone ready for school) and by the time I dropped them all off, he still looked so sad.  I felt awful, a big lump sat at pit of my stomach as I thought of his sad little face.  This is supposed to be such a happy time of year.

The fist thing I did when I got home was google “How old do children stop believing in Santa?”  Well guess what?  The average age seems to be 8.  How did I not realise??  I sat with a cup of tea and thought over every little thing he’s said and done since the start of this ‘festive season’ and the penny finally dropped.  How did I not see if before??  The poor kid has obviously put two and two together and come up with five.  He must be so confused.  Is Santa real or not??  His friends and his gut are telling him NO and his mum is telling him YES.  It also must be so disappointing to realise that the whole magic of Santa and Christmas is not what you always thought it was.  Everything is suddenly new and confusing!!

I feel terrible.  I wanted to drive straight back to school, pull him out of the classroom and give him a big hug.

Now my next job is to make it all better.  I need to tell him the truth but at the same time keep the magic of Christmas alive.  How do I do that??

If anyone one has been through this before, please tell how you dealt with it – all suggestions welcome!