This is the first time in almost a week that I have had more that 2 minutes to sit down at the computer.  It has been a HUGE week with my brother coming to stay and my parents arriving from London.  It’s still the school holidays too, which means that all routine and normality is literally flung out the window!  I have also got three crazy kids that all want different things at different times and don’t know the meaning of peace OR quiet!  By the time I get out of the house in the mornings I feel like I have been spinning around in the middle of a tornato (a bit like the tasmanian devil cartoon – anyone remember that?).

The biggest thing this week has been the preparation for Miss H’s mermaid party!

Trying to get organised, on a budget, in the school holidays with lots of willing, but no so helpful little helpers is quite a challenge.

Miss H gave me the biggest list of friends ever to invite and couldn’t possibly make the list any shorter because “they might be sad mummy, if they can’t come to my party!!” How could I argue with that??  So once the list was completed we made the invites together on the computer using Vistaprint.  I was lucky enough to have a Scoopon voucher for Vistaprint, so the invites only cost me $15 including postage.

As we had a big bunch of kiddies coming to the party we decided to hold it at one of our local playgrounds (which is also free – so great for the budget).  Our house is just not big enough to transfer the party if it rains so my plan B is no plan B!!  – But I did talk to the ‘weatherman’ every night and ask him ever so nicely to PLEASE send the sunshine our way.  It literally flooded the day before the party (with ducks swimming on the pavements by the lake), so maybe my chats actually worked.

Next on the list was to organise the lolly bags.  According to Miss H, these were the most important part of the party prep (and the cake of course).  We went to our local $2 shop and bought the bags, mermaid stickers and some ribbon, all of which cost under $10.  Into each bag we put a few lollies, an Easter egg (left over from our Easter stash, which I was VERY pleased to get rid of), some stickers, and a balloon.  Then into each ‘girl bag’ went some hair clips from Candy Bows Australia and into each ‘boy’ bag went a Hot Wheels toy car.  Considering I’m not hugely talented in the creativity department, I think they turned out really well.  We just had a bit of a nightmare trying to fill them as little Miss L thought it was just too much fun to bash over and tip out every one!!

I really wanted to make all the party food myself.  Obviously to keep costs down but also to keep it healthy and especially to control the sugar.  I’m trying my best to keep the kids sugar intake to a minimum at the moment as it has such a negative effect on their moods and behaviour.

I didn’t want to prepare the party food too far in advance as we don’t have huge amounts of space to store it and I wanted it to stay fresh – so I ended up baking for hours the day before, and by the time I came to make the cake I was exhausted (and had had several wines)!!!

I started off with the popcorn.  Well, actually I gave that job to my poor mum who had literally just stepped off the plane from England.  I had bought some cute little boxes (again from the $2 shop at 6 for $2) to make individual popcorn servings.

Next on the list was mermaid jelly.  I saw some really cute ideas on Pinterest where someone had cleverly made little jars of blue jelly with edible fish in the middle.  I searched high and low trying to find any kind of ‘under the sea’ themed lollies and I couldn’t find ANYTHING!!!  I asked Miss H if red frogs would do and she quite rightly told me that “Mermaids DO NOT eat frogs!”.  So my only other idea was to buy some little clear plastic disposable shot glasses, stick a shiny mermaid sticker (vinyl, not paper) on the inside of each pot and fill it with blue jelly.  It worked brilliantly and the kids loved them!!

Next I made some honey starfish biscuits and Honey-Joys with Mermaid sprinkles.  The recipe for the Honey-Joys came off the back of a Kellogs Cornflake box and all it involved was melting together 180g butter, i88ygfcoik 120g caster sugar and 2 tbs of honey.  Once it was melted I slowly mixed in 8 cups of cornflakes and working pretty quickly, spooned the mixture into cupcake holders.  I then baked them in a 180 degree oven for 10 minutes and before they cooled added the sprinkles. (I use blue edible ‘mermaid’ glitter).  So easy and really yummy. 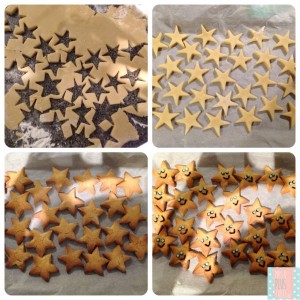 I found this cookie dough recipe on a blog called “Debbie does homemade” for the starfish and it really was the best cookie dough I’ve used so far.

Apart from chopping up fruit to make a fruit platter (which I delegated to my brother, who has been visiting us from Hong Kong) all I had left to make was THE birthday cake!!  If you read about Miss H’s cake request you’ll know this was not going to be an easy job for me!!!  By the time I started it was already 10pm and I was exhausted.  I had also had a couple of wines, which was probably not the most sensible thing to do – but it was a Saturday night and everyone else had had a few!!

I found a chocolate mud cake recipe via google (which I will blog soon) and attempted to make it for the first time.  It required 800g of dark chocolate which I didn’t have, so my poor dad got sent to the shops!  I also had to double the recipe as the number 4 tin I had hired was huge.  I was so tired that I started doubling the ingredients and then couldn’t remember what I had doubled and what I hadn’t, so an awful lot of guess work went into this cake!!!  Miraculously (after and hour and 45 mins of baking!!!!!) it turned out beautifully.

I made some blue buttercream icing to look like the ocean and set about icing and decorating it.  My extremely talented friend made me a mermaid and a few shells from icing, which I added on top with a few blue bubbles and some more edible blue glitter.  It looked fabulous and I was sooooo pleased with myself.  There was just something not quite right with it and the more I stared at it, the more I just couldn’t put my finger on it.  So I decided that I just needed to to bed.

The next morning was such a rush to get everything to the park and set up for the party that I didn’t realise until later that day that my number 4 was backwards!!!!!!  What a dummie I am!!  Has anyone else made such a crucial mistake without even realising????  No one seemed to notice (or they were just too polite to tell me) and the kids had a wonderful morning.  (AND the cake tasted great!)

Thank goodness I don’t have to do another party for at least six more months!!!

Do you have a party coming up that you have to plan for?  My advice – don’t drink and bake??? (not that I drank a lot of course, but Mr D is always telling me “it doesn’t take you much”).

20 comments on “A mermaid birthday party”