Yesterday I decided to take the kids into the City to visit the Sydney Wildlife Centre and the Aquarium in Darling Harbour.  There are two ways for us to get there from the Beaches – a bus ride to Manly, and then the ferry across to Circular Quays (where the Opera House and the Bridge are), or a bus ride directly into the city centre.  We opted for the direct bus, as surely one bus ride and a short walk would be the simplest way???

I parked the car at the beach and Master J scooted off to the bus stop ahead of me.  By the time I got there he was deep in conversation with an old lady.  “This lady’s called Carol, mum, and she does those funny exercises at my swimming lesson.”  “Oh” I said looking a bit puzzled, but Carol filled me in.  There is a pensioners aqua aerobics class that happens in a large sectioned off area of the pool while Master J and Miss H have their weekly swimming lessons.  Carol said she knew exactly who Master J and Miss H were as she sees them every week mimicking the old dears on the edge of pool.  “Oh god”, I said, slightly embarrassed, “I hope they don’t put you off your class!!!” “Oh no we love it! It gives us a constant source of amusement doing our classes.”  Thank goodness for that I thought and god knows what those lovely old ladies must think of me!!  Every week without fail both Master J and Miss H stand on the end of the pool next to the instructor and start copying the aerobics moves – kick your legs, left, right – arms in the arm – swing to the left – come on ladies!!!!!  And every week I get more and more flustered, telling them “Stay away from the edge!  Come back here!  Stop copying them, you’re going to get me into trouble!!” but they just can’t help themselves.   I’m so glad I now know that they enjoy the entertainment!!  I can relax at last!! 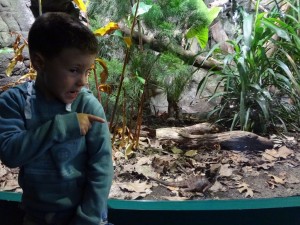 I park the pushchair and scooter on the bus and off we go.  Master J still chatting away to Carol.  At the next stop two more ladies with pushchairs got on and as they had tiny babies, I thought we’d better move seats so they could have ours.  Next a few teenagers got on, two young lads who sat down behind us, and a young girl who decided to stay standing for whatever reason.  There were some stickers on the window next to Master J, and Master J being Master J, started with the twenty questions.  “What do those stickers mean mum?” he asked.  “Well, they mean that this seat is actually for people who are disabled and are in a wheel chair or have a broken leg or something like that.  If they get on the bus, we’ll have to move and let them sit here.”  “Oh, and what about this picture?” he said pointing to lady with a large tummy.  “That’s a lady with a big tummy because she has a baby in it.  She would need this seat too”.  Looking very concerned, he pointed at the young girl standing in the isle behind us and said (not very discretely) “that girl has a huge tummy mum, shall we let her have our seat?”  At this point the two teenage boys sitting behind us almost died – I could hear them desperately trying to cover up their sniggers behind their hands!!  I was mortified – this poor girl only looked about 18 and was clearly a little on the ‘heavy’ side.  I decided I just couldn’t turn around and look, so I just had to explain that she didn’t have a baby in her tummy but he was very kind to think she might need a seat!!  And the questions continued – “ That man must be an Indian mum, because he’s wearing an Indian hat!” (It was a rather large turban).  “He might not be honey, lots of people from all different Asian countries wear hats like that.”  “No, he IS mum, look again!!  We learnt that it at Kindy” He persisted pointing at this poor man who didn’t know where to look!!

Phew, I was rather relieved when we finally arrived in Sydney.
Once in the city, I just couldn’t get my bearings.  Not that I’ve ever been any good at map reading anyway.  It’s a far cry from the laid back way I’ve become accustomed to on the Beaches.  High-rise buildings surrounded us with hundreds of people walking past us in every direction, head down and looking like they were on some kind of mission.  Beeping horns and cars and busses everywhere!  I got out Google maps on my phone and tried to work out where we were.  “Follow the moving blue ball’ Mr D says, “It couldn’t be easier.”   Well, the bloody blue ball moves so slowly that I had to push my way down a street for about 10 minutes before I realised I was walking the wrong direction!!!!  Pushing a pram with one hand, the other hand in air trying to follow the blue ball as well as making sure the Master J didn’t take out too many people on his scooter (I did notice a few shocked faces as he flew past)!  I had had enough – so I called Mr D and made sure he came out of his Office and escorted us to the Wildlife Park.  I should have just done that in the first place!!!!
Thankfully the Wildlife Centre was worth the trek in!  It was so well set out that apart from the odd glimpse of a high-rise here and there you would never have known you were in the middle of a busy city.  Firstly we had to make our way straight to see the crocodile.  Ever since discovering the wonders of Steve Irwin, Master J has become fascinated with these huge and rather frightening, dinosaur-like creatures.  I did chuckle to myself though as there was a huge flat TV screen on the wall on the walk down to the crocodile enclosure and as the kids ran past it (slightly ahead of me) this enormous 3D croc dived out of the screen with it’s mouth wide open and both the kids leapt almost six foot into the air.  Thankfully I knew what was coming otherwise I’m sure I would have made a complete ass of myself!! Just then an announcement was made that there would be a crocodile talk commencing in 5 minutes.  “Hey Master J” I said, lets go and see the crocodile talk”.  “YEAH!!!!”  he said, clearly very excited.  The man began his talk and Master J kept interrupting saying, “when’s it going to start mum”.  “It has”, I told him, “ and if you stop asking questions and listen you’ll be able to hear what the man is telling you.”  He just wouldn’t let up though and eventually I got out of him that he thought the crocodile was actually going to talk because I had said we were going to ‘see the crocodile talk’!  Honestly sometimes you just can’t win!
After cuddling a koala (which really is as soft and cuddly as it looks), holding a blue tongue lizard and stroking a python, I asked them what they’d like to see next.  Miss H’s replied “I want to see a pink pony mummy”.  Oh geez I though, why did I not see that one coming???  I had to explain as best I could that pink ponies don’t live in the zoo, but she still proceeded to whinge “I wanna pink pony” for the next half an hour!  Ask your father I kept thinking in my head!!
Mr D had told me that he would be in a meeting from 4pm to 6pm so if I needed help finding the bus, I’d have to call before then.  Time was really starting to tick by, but the kids were having so much fun, that I just couldn’t get them away quick enough.  Besides, I thought, how hard can it be to retrace my steps back to the bus stop??  However, I was soon to discover the return busses don’t go from the same place, not even from the other side of the road!!  Stupid system I mutter and get out the blue ball again!!!!  Technology is so wasted on me!!!  After walking around (god knows where) for over half an hour (with pram and scooter) trying to work out which direction the ball was taking me, we finally found the right stop.
By the time we arrived back in Collaroy and I could take in the most enormous breath of sea air, I realised that I am so not meant to be a city slicker!