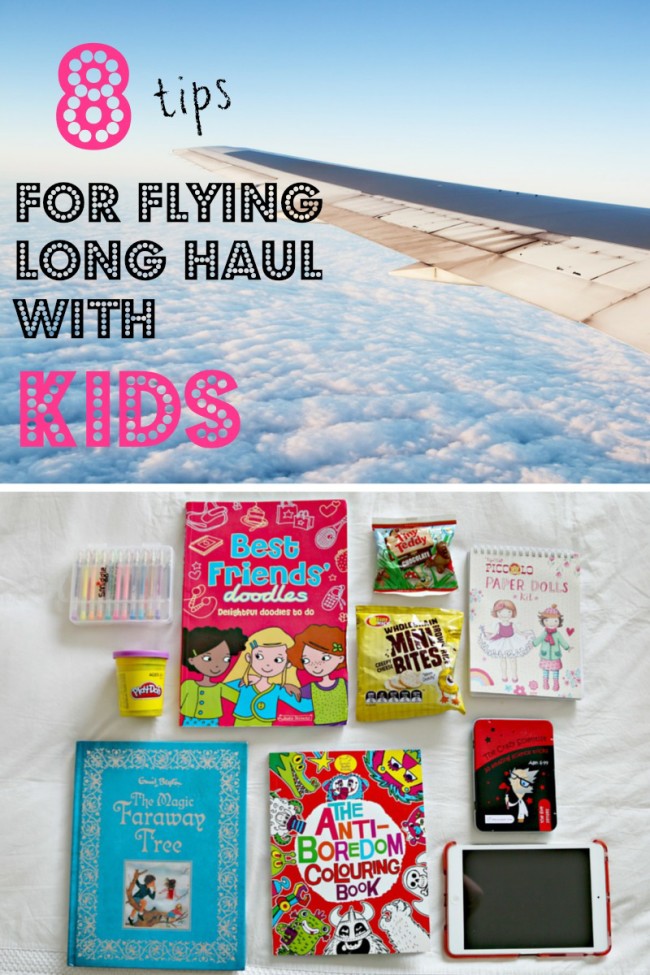 Quite frankly just the thought of travelling any longer than two hours in a confined space with three kids makes me want to lie down in a dark room with a glass of wine.

I used to be cabin crew for Virgin Atlantic on all their long haul routes, so I am well acquainted with being on an aircraft for long periods of time.  Flying long haul with kids however …….. well that is a whole different ball game.

We recently flew to South Africa from Sydney, which is a 15 hour flight.  Yes, you read that right – 15 hours in the air. I was super excited about our holiday but the ‘getting there part’, especially with the kids in tow was causing me a few sleepless nights.  I had visions of meltdowns, crying, cabin fever and boredom.  It was not going to be pretty.

Fortunately we did all survive and with our sanity pretty much in tact too.

Here are my tried and tested survival tips to help you get through any long flight with kids.

1.  Plan, Plan, Plan,
Check with your airline prior to your flight if they have any special allowances for children that you may need to book ahead.  Some airlines offer kids meals which have to be pre-ordered.  You don’t want to get on board and have your little one served coq-au-vin for dinner when the child across the aisle is having the equivalent of a happy meal.  There are also ways of avoiding airport queues if you let the airline know that you will be travelling with small children.

2.  Check in online
Check-in desks at airports can often be chaos and have massive queues.  Believe me, it’s the perfect situation for a child to have a melt down.  There is often a much shorter ‘baggage drop’ queue for those who have already checked in.  When doing your online check-in, be sure to have a look at the seating plan before booking your seats.  You don’t want to end up next to the toilet, or right next to the galley where the noisy staff could potentially wake your sleeping child.  Also think about where you’d like to be seated as a family. We chose to sit in two isles, one behind the other.  This way one of us only had one child and the other two.  It’s much easier to manage this way and you can always swap mid flight.  If the flight isn’t full it will also mean you are more likely to have a spare seat or two next to you to spread out in. No single traveller or couple is going to seat themselves next to children by choice. 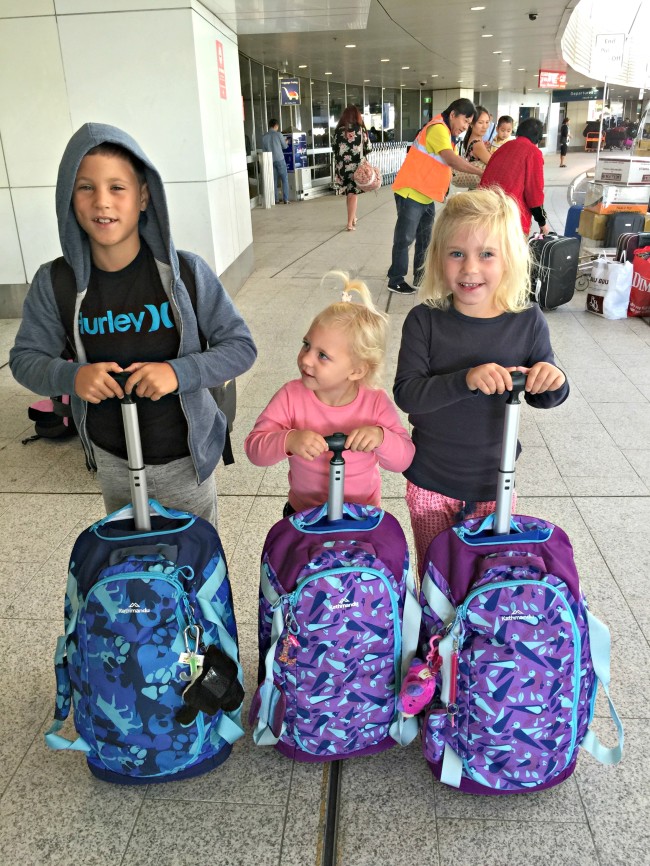 3.  Pack a plane bag
Having a bag of ‘goodies’ especially for the journey creates a lot of excitement for the kids.  Each child will have their own hand luggage allowance so make the most of it and use it.   Before you leave, have a hunt around for some cheap toys and activities that you could easily use on the plane.  Here are some things that I packed in our plane bags:
1.  Socks.
2.  A warm jersey.
3.  A set of head phones for each child.  The ones on the aircraft are not designed for children.
4.  Empty water bottles (they can use their own bottles instead of the aircraft plastic cups.  There is much less chance of accidental spillage this way).
5.  Baby wipes.
6.  Snacks and treats (in sealed bags).
7.  Colouring books/craft books and pens.
8.  Ipads (very important, if you have them).
9.  Ipad charger.
10. Small toys or travel games.
11.  If your child has a blankie, bunny or some kind of comforter – PACK IT.
12.  Boiled sweets.  Sucking on these during take off and landing can ease the pressure in your child’s ears, making it a lot less painful for them.
13.  Any medication you may need.

4.  Ipads
We found having ipads on the plane was an absolute godsend.  It is amazing how much you can pack onto those little devices that will keep kids entertained for hours.  Just make sure that you have plenty of new games, audio books and movies on them, so download in advance. Also don’t forget to pack a charger. 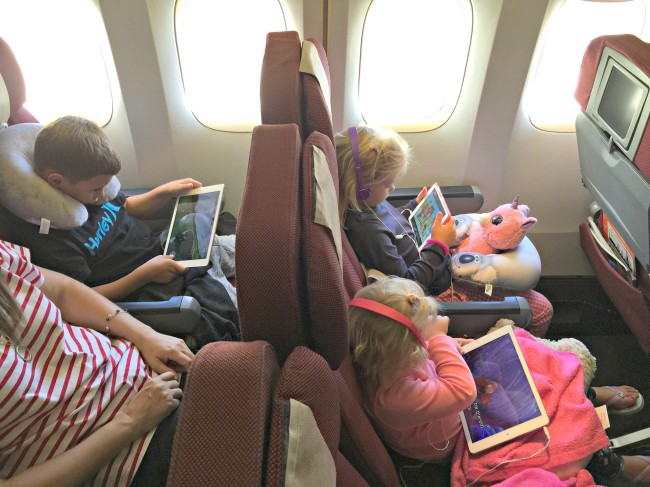 5.  Expect the worst
This may sound a little pessimistic, but what I mean is that you just have to be prepared for the ‘shit to hit the fan’ at any given moment.  As a parent there is a slim to none chance that you’re going to kick back, have a glass of wine and watch a movie.  The kids are going to be demanding your attention on and off throughout the flight, so as long as you are aware of this, it won’t seem so bad.

6.  Don’t peak too soon
Often long haul flights are broken into two legs, and it’s usually the second leg where the problems start. The first flight is fun and exciting, but by the time you get onto the second leg, the kids are exhausted and the ‘wheels are starting to fall off the bus’ so to speak.  NOW is the time to pull out the best bits from your travel bag.

7.  Try not to look too cool, calm and collected
Sometimes a little bit of chaos can work in your favour.  There is a lot of waiting around and queueing in airports which can be very tiring and boring for kids.  Often officials will allow families with children to the front of the queue and the fastest way to make this happened is to have a child throwing a tantrum. If you’re lucky enough to escape one those then just ask an official and they’ll more than likely to wave you ahead.  Otherwise just create a bit of drama by accidentally stepping on your childs toe. (I’m kidding, but desperate times can mean desperate measures).

8.  Jetlag
This is something that I didn’t take into consideration and it totally kicked my butt.  For 5 days after we came home, the kids were playing tag team at waking up in the middle of the night and wanting to ‘party’.  It was exhausting and like having a new born baby again.  I’m not an expert on combatting jet lag however, next time we fly long haul I will make sure I give us a few days to recover before diving back into the rat race that’s for sure. 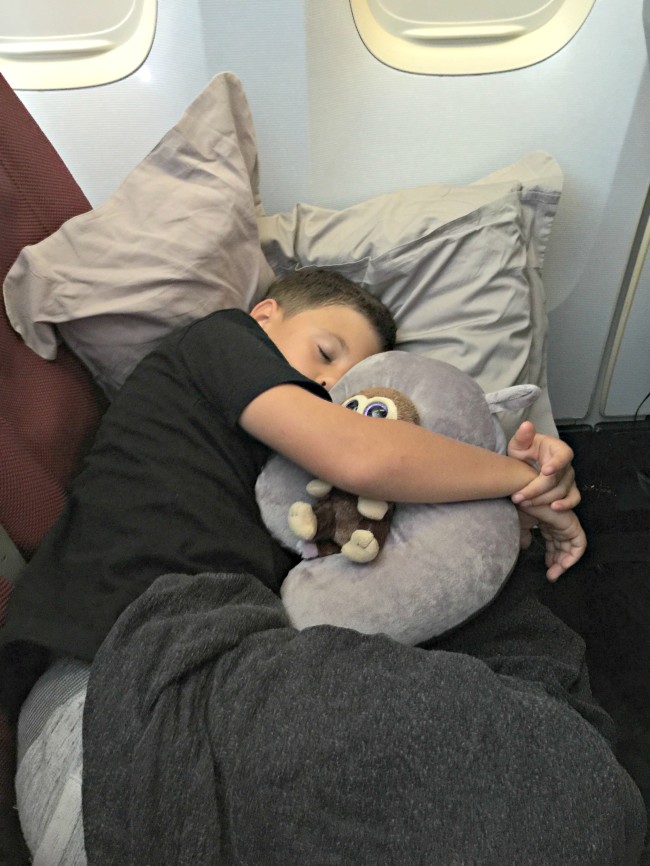 Have you got any big trips planned that involve long flight for the next school holidays?

* This post has been entered as part of the Virgin Australia Top Travel Tips competition.

40 comments on “8 Tips for flying long haul with kids”