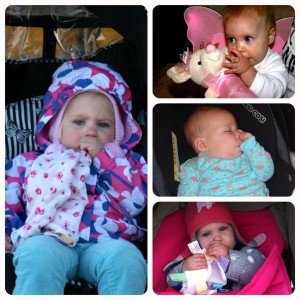 Miss H has sucked her thumb for as long as I can remember.  In fact, I’m pretty sure if you hold up her scan photo at a certain angle it would appear that she is sucking her thumb in my tummy too.  I can still remember my Granny Marge (my mum’s mummy), who was visiting us not long after Miss H was born, saying, “I have never seen a baby try so hard to suck her thumb.  If she manages to find it’s way into her mouth she deserves to have it there!”  And she did!!  Until last week when I decided enough was enough and it was time to stop!
You’re a big girl now Miss H” I told her.  “3 girls don’t suck their thumbs”. “and I’m 3!” she replied, very sure of herself.  “That’s right” I said.  “Mummy has some magic nail polish to put on your thumb so that you keep it out your mouth.  Can I put it on??????  It’ll make your nails very shiny and sparkly……”  “Ooooh I love sparkly nails mummy, can I see it?”  “Yes!   “Let’s put it on quickly.”  Oh I’m so mean, aren’t I?  Tricking the poor little munchkin.
The last few days have been quite tough as the “magic polish” is actually quite revolting (I accidentally got some on my finger and nearly gagged a few hours later when I tasted it.). We’ve gone from genuine upset ……”Muuuummmmmmyyyy, my thumb tastes yukky!  I want you to take this nail polish off!!” she sobs, to just plain outrage………. “I DON”T LIKE IT!!!!!  (stamps left foot) and “I’M NEVER GOING TO BE YOUR BEST FRIEND!! EVER NEVER!!!!!”
I’ve heard it only takes 7 days to break a habit but the lady behind the counter in the pharmacy told me it would take at least 5 weeks.  I’m starting to think she might have had a point.  Poor little H is really struggling and some days all I want to do it just let her snuggle up with her favorite ‘raggy’ and have her thumy back.
When I think about It, I’m not sure I’ve ever had the self-discipline to totally break a habit – and I have many that could really do with being stomped on!  Finishing the kid’s dinner!  Now, that’s a bad one, and probably one of the reasons I’ve never been any good at dieting!!  Sleeping on my tummy, and crossing my legs when I sit down.  Both of which are supposed to be terribly bad for your posture and my chiropractor has been telling me for years to stop doing them.  I’m sure the list is endless and no matter how hard I try, I just can’t break them.
So actually my little 3 year old is doing a FABULOUS job.  You can do it Miss H.  Big kiss from mummy x
Do you have a little thumb sucker?